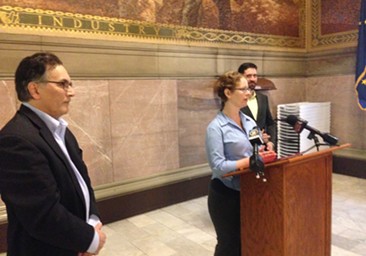 CP photo by Ryan Deto
Environmental advocates at a press conference in the Allegheny County Courthouse.
A new report released March 28 by the statewide environmental group PennEnvironment shows that for the past eight years, fracking companies in Pennsylvania have together committed 4,351 environmental and public-health violations.

That amounts to 1.4 violations per day in the state. This number is pretty significant as is, but PennEnvironment also pointed out that only 17 percent of those violations were issued a fine. Additionally, that average fine was only $5,263.

Since many of the oil and gas companies that were administered fines, like Chesapeake Energy, pull in billions of dollars in revenue each year, Stephen Riccardi of PennEnvironment says this is akin to charging 10 cents for a parking ticket. “There would be illegally parked cars in every handicap spot and probably cars littering the sidewalk,” said Riccardi at a press conference at the Allegheny County Courthouse. “If the penalty isn’t high enough, it won’t stifle illegal polluters.”

Riccardi says these low and infrequent penalties can actually set up a toxic environment in the state. “Sadly, the message is clear: It pays to pollute if you are fracking in Pennsylvania,” said Riccardi. “These violations pose serious environmental and public-health threats.”

“Proximity to well pads has been associated with increases in a person’s risk for respiratory and neurological problems, as well as elevated risks of birth defects,” said Rippel.

The Pennsylvania Medical Society, a health-advocacy coalition, has recently called for a moratorium on fracking.

One example of a direct link between fracking and health issues is contaminated water. Riccardi cites Texas-based Range Resources which leaked pollutants into Brush Run in Washington County last year. He adds that Pennsylvania has identified 283 instances where drinking water has been contaminated due to fracking.

John Stolz, director of Duquesne University’s Center for Environmental Research and Education, said there have been 9,400 complaints filed with the Pennsylvania Department of Environmental Protection since 2004, and more than 4,000 have been related to water contamination, according to a report from Public Herald, a nonprofit investigative journalism organization out of Coudersport, Pa.

“There is something going on, and we need the DEP to step up and hold the industry responsible,” said Stolz. “We need the industry to admit that there are some [environmental] challenges to fracking.”

Riccardi said PennEnvironment is calling for the state to restore adequate funding levels to the DEP, which has seen cuts for many years. (In 2008, the DEP budget was $229 million; in 2016, it was $148 million.) He said this can create more positions which can enforce environmental laws more frequently. Riccardi also said fines need to be increased for repeat violators.

For those looking to see increasing in fracking, this report comes at an inopportune time. Recently released census figures for 2016 show the Pittsburgh region losing thousands of residents for the third straight year. Some believe if the fracking industry were to return to levels it saw in the early part of the decade, it could help build the population back up.

Riccardi said that in the long term, fracking isn’t a good idea for the region.

“We don’t see fracking as a long-term sustainable investment in communities in Pennsylvania,” said Riccardi. “Really, we see it as an existential threat to the health of Pennsylvanians and to the safety of our environment.”

Minus the Bear isn’t finished

Billions on way to attack abandoned mine pollution in Pennsylvania