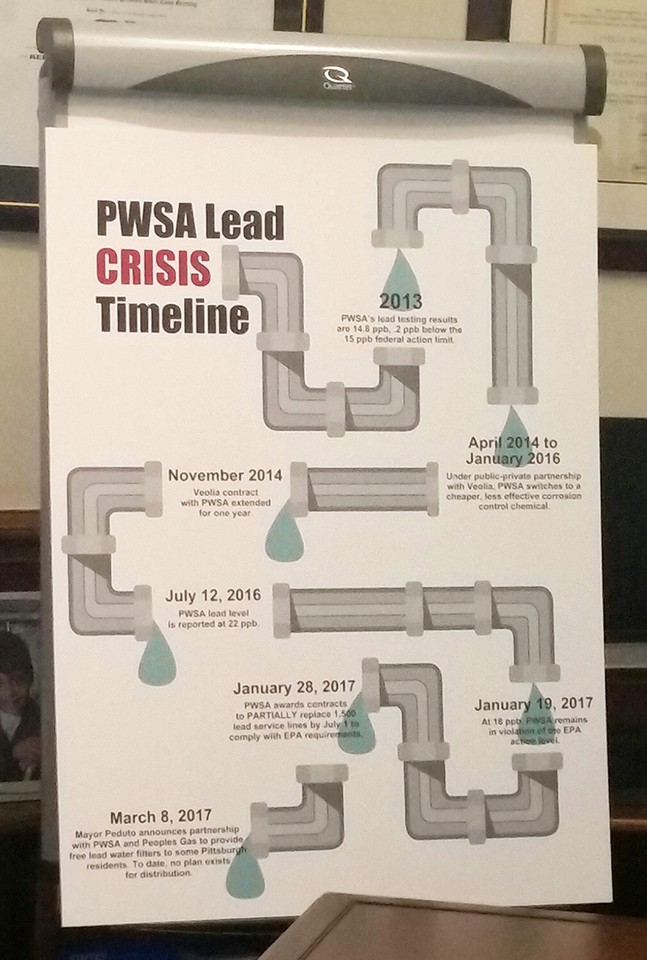 CP photo by Rebecca Addison
Timeline of PWSA's lead issues
According to the Centers for Disease Control and Prevention, partial replacement of lead service lines has been linked to an increased incidence of high blood lead levels in children. But partial replacement of lead service lines is exactly what's happening in Pittsburgh and other cities around the country right now.

"If you don't do [full replacements], you are ensuring that people are going to continue to be poisoned," Allegheny County Controller Chelsa Wagner said in an interview with Pittsburgh City Paper. "It's actually worse. By changing out just one part of the line, you're actually making the problem worse. You'd be better doing nothing at all."

Earlier today, at a press conference in the Allegheny County Courthouse, Wagner called on Pittsburgh Mayor Bill Peduto to halt all partial lead service-line replacements by the Pittsburgh Water and Sewer Authority.

"Hundreds of these dangerous partial replacements have already been performed throughout Pittsburgh, and the PWSA is slated to complete 1,500 by July of this year," Wagner said today. "When left to fend for themselves, families either cannot complete the replacement of the private side of their line because they cannot afford to do so, or will not because they don't understand the level of risk, and the fact that the partial work that has been done is in fact making the problem worse."

Lead tests of Pittsburgh's water have shown levels of lead above the federal action limit of 15 parts per billion. And as a result, Pittsburgh has been required by the Pennsylvania Department of Environmental Protection to replace seven percent of its lead service lines each year. However, the mayor's office says Pittsburgh is barred by the state Municipal Authorities Act from replacing the residential portion of the lines.

"The City is in the midst of an open, transparent and public process to evaluate the future of the PWSA, which includes looks at lead service-line issues, and the authority's crippling $1 billion in debt," Kevin Acklin, the mayor's chief of staff said in a statement responding to Wagner. "It appears the County Controller instead wants to preserve the status quo at the authority and push massive tax increases on City residents, all while taking cheap political shots at those actually working to address the authority's issues."

She is calling on the mayor's office to take steps to replace the entire portion of each lead service line and says the process of replacing the private portion could be done for $25 million over the course of 5 years, or and estimated $1,200 per line.

Earlier this month, the Urban Redevelopment Authority approved  a low-interest loan program to help low-income residents pay for their lead service line replacements. But Wagner says the program has only been funded for 75 people, far less than the thousands of residents requiring lead line replacements.

Music To Sweep To 13: Fela Kuti