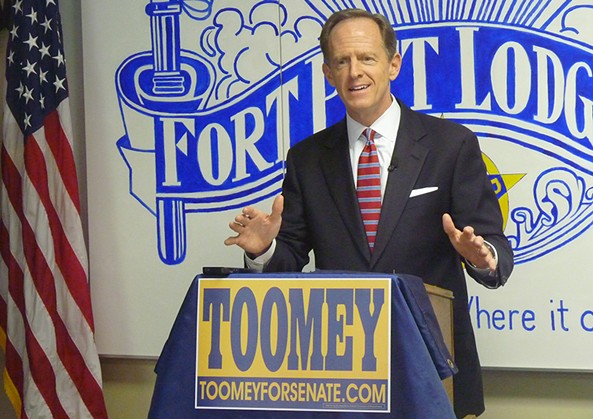 CP photo by Ryan Deto
Republican Sen. Pat Toomey decrying sanctuary cities at a campaign event in October 2016.
The Republican Party got serious about eliminating so-called “sanctuary cities” (municipalities that limit communication between local law enforcement and federal immigration officers) in the fall of 2015. On the campaign trail, then-candidate Donald Trump had been decrying them, claiming they were leading to increased crime by undocumented immigrants, even though a recent study from the libertarian think tank Cato Institute says the “incarceration rate for [undocumented] immigrants is lower than the incarceration rate for native white Americans.”

Regardless, Republican senators, like Pennsylvania Sen. Pat Toomey, got on board the anti-sanctuary-city train soon after Trump raised the issue's profile. For example, Toomey co-sponsored legislation in October 2015 to strip federal funds from “sanctuary cities,” and to get them to increase communication between local police officers and the U.S. Immigration and Customs Enforcement officers.

Toomey continued carrying the anti-sanctuary-city torch by reintroducing legislation in July 2016. Though that legislation failed to garner enough votes to overcome a Democratic filibuster, Toomey still backs ending sanctuary cities and said so as recently as February, in one of his telephone town halls.

But now, President Trump seems to be at odds with Toomey, at least in the details of their policy proposals. This week, Trump released a budget proposal with massive cuts to the Environmental Protection Agency, the Department of Agriculture and many programs that help cities and towns address infrastructure and housing.

Toomey’s Stop Dangerous Sanctuary Cities Act (S. 3100) proposes withholding federal funding from the Economic Development Administration and Community Development Block Grants as a way to pressure sanctuary cities to communicate and cooperate fully with ICE. But Trump’s budget proposal eliminates those two departments, leaving Toomey’s bill without anything to withhold. It’s like punishing a child by saying "no video games for a week," when the child doesn’t have any video games to begin with.

Toomey issued this statement shortly after Trump released his budget proposal: "After years of overspending, I am encouraged that the President has proposed actual spending cuts and has committed to maintaining the overall cap on discretionary spending. I look forward to carefully examining each of the proposed reductions in this budget proposal." (It should be noted that Trump's proposal doesn't reduce overall federal spending; it mostly just reallocates billions of dollars to the military.)

Trump has been criticized for making policy proposals that aren’t well constructed and can’t actually be applied. (For example, his second attempt at a travel ban for several Muslim-majority counties was held up this week by federal courts; Trump withdrew his first attempt after it was blocked by courts.)

Representatives from Toomey’s office did not return a request for comment for this article.

Sundrop Carter, of the Pennsylvania Immigration and Citizen Coalition, says she is not surprised that Trump’s proposal would undermine Toomey’s bill. But she says that in the end, it doesn’t really matter, because most GOP leaders would rather issue rhetoric that emboldens xenophobia and scares immigrant communities, than pass effective laws.

“Toomey's bill, like most anti-immigrant bills, is more about the rhetoric and pushing forward an anti-immigrant agenda than it is about the specifics of the bill," says Carter. "And the current administration clearly values the xenophobic value of policies more than their actual legitimacy or constitutionality.”