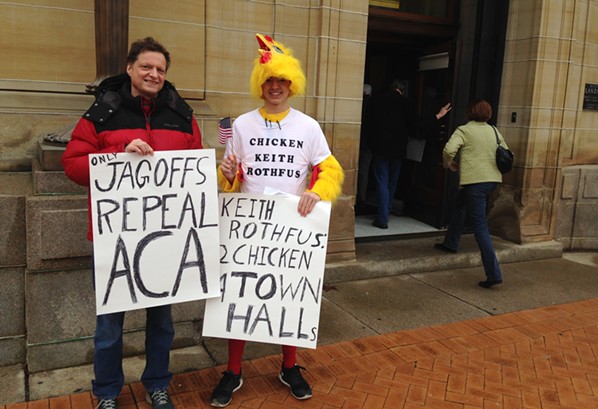 CP photo by Ryan Deto
Darwin Leuba (right) says U.S. Rep. Keith Rothfus is a chicken for not holding a town hall.
Constituents of U.S. Congressman Keith Rothfus (R-Sewickley) are done politely requesting a town hall with their representative. Now, they are moving to draw attention to the fact Rothfus has never held a town hall during his entire six-year tenure representing Pennsylvania’s 12th Congressional district.

And one constituent is gathering attention in a very unique way: by donning a chicken costume.

“Rothfus is definitely a chicken for never hosting a town hall,” says Leuba. “It would be a great thing so we can understand his opinion. He should hold a town hall like Doyle.”

Leuba says he has been able to attend one of Rothfus’ “Coffee with Keith” events in the past, but says that Rothfus hasn’t held one of these low-key meetings in several months. (The coffee events usually only attract a handful of constituents and are typically scheduled during the middle of the day during the week, which Leuba says makes it impossible for many of Rothfus’ constituents to attend.) Rothfus has traveled to events throughout his district during Congress’ recesses this year, like a meeting in Aspinwall with firefighters and a talk at Duquesne University's law school, but the events were not announced publicly.

Leuba has grown so frustrated with Rothfus’ lack of accessibility that he created an official political-action committee, commonly referred to as a PAC, called the “Yinzers Against Jagoffs PAC” (Federal Election Commission ID is C00635169). He says the PAC is about increasing engagement in the 12th District, which spans six counties including Beaver, Allegheny and Cambria, with the ultimate goal of getting Rothfus to hold a town hall.

“It’s not just about buying more chicken suits,” says Leuba. “It is about outreach — bring a little hope that there will be more representation from our representative.”

Leuba's father, Sanford, was standing beside his son outside Soldiers & Sailors and is also concerned about how Rothfus will vote on the repeal of the Affordable Care Act. He says he would like to speak to Rothfus before a vote, which could come as early as March 23.

Leuba has been active in politics in the district and volunteered for Erin McClelland, Rothfus' political rival, last year. He says part of the reason Rothfus has continuously won re-election is because Rothfus stays relatively quiet, and voters don’t really understand his values and just support his incumbency.

“I think the way [Rothfus] does win, is that he lays low,” says Leuba. “I think when people actually know him and his stances, they will change their minds.”

Music To Sweep To 12: Waterparks and Dirty Beaches