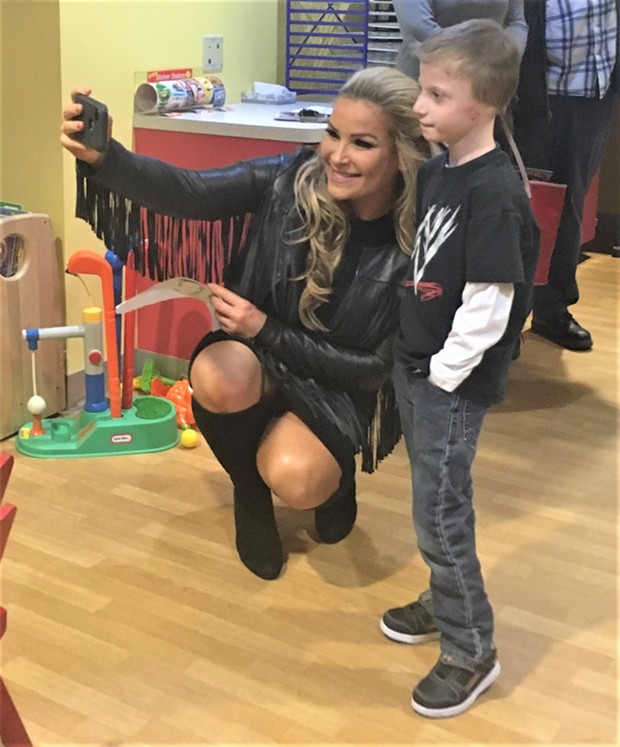 Photo by Meg Fair
WWE's Natalya Neidhart takes a selfie with a young fan at Pittsburgh Children's Hospital Tuesday
WWE’s Smackdown stars Alexa Bliss, A.J. Styles, Natalya Neidhart, Mojo Rawley and Apollo Crews took to Children’s Hospital for a midday visit to patients this afternoon. Accompanied by a horde of photograhers from local publications and a small WWE PR team, the superstars began on the lowest level in a playroom.

Styles challenged a young girl to air hockey while Neidhart chatted with a young boy who shyly showed off his writing skills and Rawley (unsuccessfully) attempted to form a band with some patients using Rock Band guitars in the room.

It felt, admittedly, voyeuristic to be among the sea of cameras that swarmed upon each interaction with lights on. When the cameras dipped back, however, the wrestlers and the kids had an opportunity to warm up to one another.

Our girl @chelseawheels03 at the #ChidrensHospitalOfPittsburgh & Chelsea is one of the most talented girls I've ever met! 🦋 @AlexaBliss_WWE pic.twitter.com/cryh0TbhSl


The five superstars took turns in rooms on several units. Some of the patients visited were under cancer treatment, others in the cardiology and neurology unit. Each child visited was given a child-size replica of the WWE World Heavyweight Title belt that was then passed around and signed.

Giving belts and meeting lots of kids meant that the crew wasn’t always interacting with a fan. Some of the patients had no idea who they were. One youngster exclaimed, “I don’t know what this is!” when his belt was handed to him, which was met with genuine laughter from the crew of athletes.

Bliss showed the young boy how to toss the belt over his shoulder, as it was a little too big for him.

These visits are important to current Smackdown women’s champion Alexa Bliss. When Bliss was 15, she was hospitalized for a life threatening eating disorder. During her treatment, a professional soccer team came to visit patients, including Bliss.

“I wasn’t a soccer fan, but it felt exciting to be visited,” says Bliss. “We’re not here just for the kids who know us.”

Both Natalya and Bliss suited up to enter a room for a young girl who was in isolation. With no cameras allowed, the two dipped in for one of the longer visits.

“She’s so excited to meet you girls,” said the gentleman who handed them the yellow suits to cover their clothes.

“We can’t imagine what these kids have to deal with and fight through every day, so if we can make a moment of their day brighter, we’ve done our jobs,” says Bliss.

Watching Bliss interact with patients is a fun tightrope act between her onscreen character and her real-life personality. Right now both Natayla and Bliss are heels, or villains, so it’s a total warp of the wrestling universe’s current canon to seem them interact so sweetly with children.

“When kids [who are fans] see me come in the room, they’re expecting this fiery character, but obviously I’m not going to be that. I try to be sweet while keeping it a little sassy,” she explains.

These visits are a part of most of the WWE roster’s routine, as the corporation founded Connor’s Cure, a fund through the Children’s Hospital of Pittsburgh dedicated to pediatric cancer research. The fund is named after Connor Michalek, a young WWE fan and Pittsburgh resident who touched the hearts of wrestlers and WWE’s corporate figures. Michalek passed away from a rare cancer, medulloblastoma, at the age of eight.

Connor’s Cure helps patients access and pay for treatment, and a recent partnership with the V Foundation for Cancer Research helps with grants for research around pediatric cancer. Stephanie McMahon, a chief brand officer of WWE and RAW’s commissioner, is also a member of Children’s board of trustees.