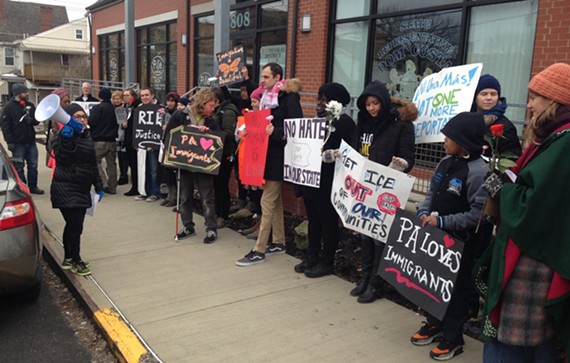 CP photo by Ryan Deto
Immigrant-rights advocates and constituents protest outside Dom Costa's office in Morningside.
In the aftermath of recent immigration stories like the deportation of Pittsburgh immigrant-rights advocate Martín Esquivel-Hernandez and President Donald Trump’s immigration executive orders, thousands of Pittsburgh residents have responded with a call to action. They are demanding local laws and policies that are sympathetic to immigrants, both documented and undocumented.

And a group of immigrant-rights advocates and constituents are not happy about it. On March 13, outside of Costa’s Morningside office, more than 30 people protested past and recent actions from Costa on immigration-related bills in the Pennsylvania legislature; 10 of the 30 people were Costa's constituents.

Costa and DeLuca (D-Penn Hills), for example, have recently co-sponsored HB 856 and HB 459, bills that would require Pennsylvania employers to use E-Verify to check if workers are legally authorized to work in U.S., and would impose penalties on business that hire undocumented workers.

On their faces, the bills appear to punish employers, not immigrants, but Guillermo Perez, of the Labor Council of Latin American Advancement, says the potential laws could further encourage employers to keep all workers off the books, thus exposing employees, including the undocumented, to sub-standard wages and working conditions. Additionally, mandatory E-Verify programs in other states have had mixed results, and penalties for hiring undocumented workers are already imposed by the federal government.

“This is not in place with our values,” said Perez at the protest. “Pittsburgh has a history of embracing working-class immigrants.”

Perez also called for Allegheny County Democratic state representatives to denounce HB 14, a bill encouraging college professors and administrators to tip off U.S. Immigration and Customs Enforcement officers to undocumented immigrants, and SB 10, a bill that would strip funding from sanctuary municipalities.

“I am vehemently opposed to SB 10,” said Hannah Gerbe, a Costa constituent from Friendship. “It will only lead to increased racial profiling and deportations. I want Costa to pick the side of being welcoming and oppose these anti-immigrant bills.”

Representatives from Costa's office did not return a request for comment.

Costa was originally a co-sponsor on HB 14, and constituents and advocates protested in front of his office in February against his support. Costa later said he was incorrectly listed as a co-sponsor and vowed to vote against HB 14. Additionally, Costa, Markosek, Readshaw and Kortz all voted in favor of HB 1885 last year, which was a stricter anti-sanctuary-municipality bill than SB 10, since it required local police officers who have “reasonable cause” to believe an immigrant is undocumented to contact ICE.

Perez questions the intentions of these anti-immigrant bills. “How will any of this lead to economic growth and prosperity for workers and families?,” said Perez. “We need young, working-age people with families who want to make positive contributions to settle here in Pennsylvania.”

This idea has been echoed by both Pittsburgh Mayor Bill Peduto and Allegheny County Executive Rich Fitzgerald, who both want to see an increase in immigrants moving to the area to fill soon-to-be vacated jobs and fight population decline. According to U.S. Census figures, from 2010-2015, the Pittsburgh metro area's population would have declined by thousands had 12,000 immigrants not moved in.

Immigrant-rights advocates understand the importance of attracting and keeping immigrants in the region too, and it appears they have many Allegheny County constituents on their side. Gabe McMorland, of the Thomas Merton Center, said last week that a group of advocates spent four days phone-banking constituents to inform them of their state representatives’ support for anti-immigrant legislation. McMorland said they contacted hundreds of constituents, and many were sympathetic to immigrant issues and unaware of their state representatives' support of the aforementioned bills.

McMorland said that advocates plan to rally more constituents and hold demonstrations outside the offices of Markosek, Readshaw, Kortz and DeLuca in the near future.