Martin McDonagh's 1996 play is both exceptionally funny and exceptionally bleak. This weekend offers a rare chance to see it performed by Ireland's Druid Theatre Company, which premiered Beauty Queen way back when and is now taking it on a 20th-anniversary U.S. tour. 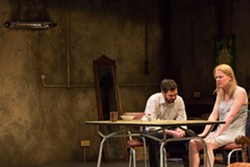 Photo courtesy of Stephen Cummiskey
Marty Rea and Aisling O'Sullivan in "The Beauty Queen of Leenane"
The play centers on the fraught (to say the least) relationship between 40-year-old Maureen (Aisling O'Sullivan) and Mag (Marie Mullen), the aging mother she cares for in their isolated small town in the west of Ireland. Wily Mag's insecurities and manipulations run up against Maureen's desire for happiness, love and escape.

McDonagh's hilarious, raucous, sharp-witted plays, also known for their sudden violence, have been frequently produced in Pittsburgh, including The Lonesome West, The Lieutenant of Inishmore and The Pillowman. Beauty Queen has been staged here, too — but not by Druid, and certainly not under the direction of Garry Hynes, who helmed both the premiere production and the Tony-winning staging.

The play builds the comedy on such pain and loneliness, especially Maureen's; whatever of the character's arrested development isn't communicated in the script is brought home by O'Sullivan's heartbreakingly adolescent body language. Mullen (who played Maureen in the original production) portrays selfish Mag with cruel guile and a knowingly insincere old-lady smile.

The August Wilson Center is located at 980 Liberty Ave., Downtown.