Pittsburghers call on PWSA to improve water quality and service 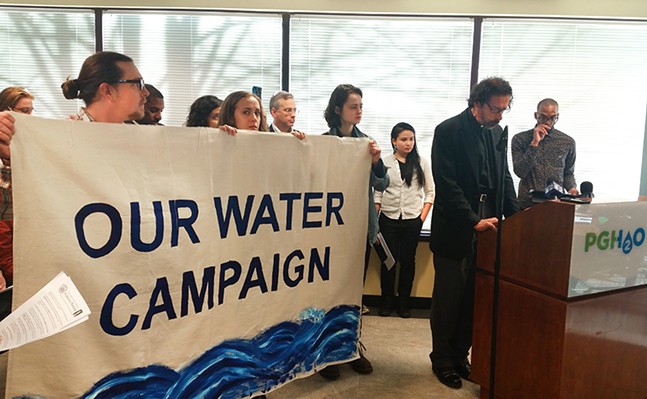 CP photo by Rebecca Addison
Pastor Vincent Kolb at PWSA board meeting
At the Pittsburgh Water and Sewer Authority board meeting earlier today, there wasn't an empty seat in the house. While many were there to simply witness the board proceedings in light of recent high-profile incidents, including reports of high lead levels, nearly a dozen called on the board to improve the city's water quality.

"There is no one in this room who wants you to succeed and thrive more than we do," said Tom Hoffman of the Sierra Club. "As leaders of [PWSA], you speak for us and are accountable to us."

One of the major topics of concern expressed by several speakers was the flush-and-boil advisory issued by PWSA earlier this month due to possible water contamination. The advisory impacted 100,000 Pittsburgh residents.

"During the advisory, I was forced to spend extra funds to ensure that I had clean water for my family," said activist Glen Grayson. "Though I was able to buy water, I thought about the seniors and other people on fixed income who really weren't able to buy water."

Another area of concern are high lead levels that have been reported in Pittsburgh homes. Several speakers called on PWSA to supply every single home with water filters

PWSA is currently being investigated by several governmental bodies, and last week Pennsylvania Auditor General Eugene DePasquale released his own report on the authority. Issues at the authority have prompted some to consider privatization, a step adamantly opposed by many of today's speakers.

"We oppose privatization," said Kim Dinh, a member of the Our Water Campaign. "We need to expand public control, not expand private control. Privatization will also increase prices, thus affecting low-income communities. Clean water is a human right, not something that is marketable."

But today's speakers weren't placing all of the blame on PWSA. According to a December press release, PWSA has over $750 million in debt, and in 2016, the authority spent $54 million paying the principal and interest on this debt. Pastor Vincent Kolb, who spoke at the meeting on behalf of the Pennsylvania Interfaith Impact Network, said half of PWSA payments from customers go toward paying off the authority's debt instead of improving the water system.

"This is not just a PWSA management problem. This is a Wall Street problem, and Wall Street got a free pass," Kolb said. "Like other cities and authorities around this country, we in the Our Water Campaign are going to demand that banks that sold us a bill of goods do what is right — restructure and forgive the oppressive debt that is keeping us from having the authority we deserve."

Scenes from Friday's 'RISE UP for Trans Equality!' protest and rally in Downtown Pittsburgh