This week, the Pittsburgh Bureau of Police released two security-camera videos showing parts of an incident that led to the arrest of Steelers position coach Joey Porter last month. The footage shows two different angles of Porter attempting to enter an establishment in the South Side where he was allegedly denied entry by a bouncer. 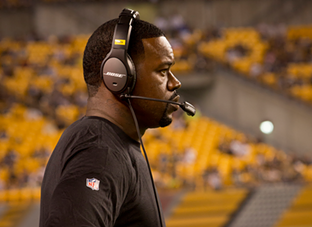 CP File Photo
Joey Porter
The police have not released footage taken by a body camera worn by officer Paul Abel who confronted Porter while he was working an off-duty assignment in the South Side. And police spokesperson Sonya Toler says they will not be releasing the footage because the bureau's "policy, which is currently still in draft form, prohibits the release of body worn camera footage."  But some Pittsburghers hoped the footage would shed light on the incident.

"Body camera footage has a lot of different purposes," says University of Pittsburgh professor David Harris. "One is to help the public understand what happened, but it is also meant to serve as evidence in an ongoing investigation. Because it can be evidence in an investigation, there might be reasons a police agency may want to keep that footage out of the public eye. The difficulty of course is for several years now, law enforcement organizations have adopted body cameras with the idea these would be public accountability tools and that's what has members of the public upset when the footage isn't released."

While Harris said he couldn't speak specifically about the body camera footage in the Porter incident, he said he hopes law enforcement organizations educate the public about the purpose of body cameras.

"I do think it's really important for the police to thoroughly educate the public on what to expect regarding body camera footage because right now it seems like there's a mismatch," Harris says. "And that mismatch can lead to misunderstanding."


In a statement announcing the release of the security footage Acting Chief Scott Schubert reiterated his support for Abel.

“In order to clear the air regarding conflicting reports in the media surrounding the circumstances that led to the arrest of Mr. Porter, I reviewed video available from several vantage points, including the arresting officer’s body-worn camera. I have concluded that the officer’s account of the incident is accurate and our officer conducted himself in the professional manner that is to be expected. Once the altercation began, the officer turned on his body-worn camera as soon as he was safely able. I support the actions of Officer Paul Able in this arrest,” Schubert said.

But a lot of coverage of the event, including City Paper's, didn't comment on whether or not the arrest was proper. Most coverage discussed why it was proper for the media to bring up Porter's history of legal run-ins, but not Officer Abel's. Abel's past includes criminal charges for alleged improper conduct while on the job.

On Tuesday, before the footage was release, Porter plead guilty to disorderly conduct and agreed to pay a $300 fine. He was originally also charged with aggravated assault, simple assault, resisting arrest, public drunkenness and defiant trespass.

Carnegie Library of Pittsburgh hosts “A Celebration of Seeds” on Saturday