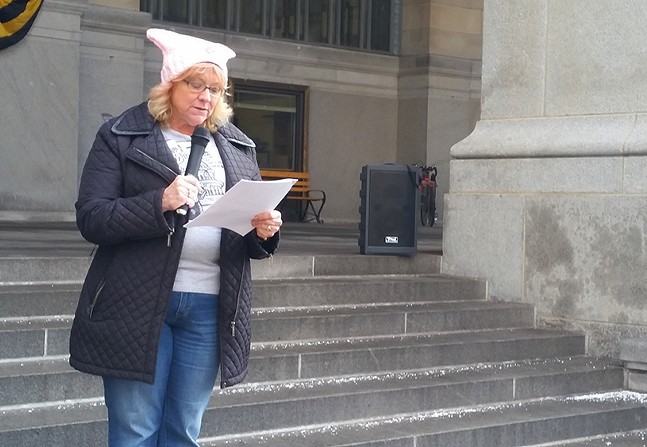 Environmental lawyer Emily Collins heard the news shortly before speaking at a rally in Pittsburgh. The event gathered members of Pittsburgh's legal community working to fight the ideology, agenda, and actions of Trump's administration.

"When we have an executive who seeks to dismantle the agency that oversees our environment, it's up to us," Collins said. "When the government isn't there to protect us, it's up to us to step up."

The event, which drew a crowd of about two dozen, was one of more than 12 rallies in cities around the country. Organizers say Trump's administration has been working to "legitimatize racial and religious bigotry, xenophobia, Islamophobia, misogyny and homophobia."

"When they come for me because of my race, or they come for someone else because of their religion, what are we going to do? Resist," said Amanda Green Hawkins, director of civil and human rights for United Steel Workers. "We have to resist, and lawyers have always been their to help."

Several of the speakers in front of Downtown's City-County Building criticized Trump's administrative appointments saying they couldn't count on many of the leaders he's selected to fight for civil rights.

"We have Jeff Session as our attorney general," Green Hawkins said. "Do you think we can count on him to protect our right to vote and to fight voter-suppression efforts? What are going to say to him? Resist."

Others criticized Trump's attacks on the legislative and judicial branches of government, such as his attempts to de-legitimize judges who blocked his Muslim ban; they also cited his attacks on the media.

"We all have to remain vigilant, and we all have to remain committed, because what we are seeing now is an assault by the executive on other branches of government," said Jon Pushinsky, chairperson of the Greater Pittsburgh ACLU’s legal committee. "We have to embrace our neighbors. There may come a day when I will call on you to identify as Muslims or any other community that is being targeted."

Above all, the speakers said many of Trump's actions during the first month of his presidency infringe on the rights laid out in the United States Constitution, and they charged themselves with fighting back.

"No amount of [support] gives you the right to counter the Constitution," said Safdar Khwaja, chapter president of Pittsburgh's Council on American-Islamic Relations. "If this was done in any other country, we would be going against that country for human-rights violations."