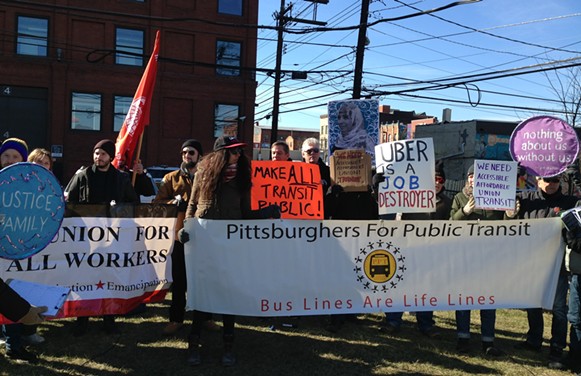 CP photo by Ryan Deto
Uber protesters in Denny Park, in Pittsburgh's Strip District
On Feb. 2, Uber CEO Travis Kalanick announced that he was leaving President Donald Trump’s economic advisory council. The billionaire was already in a lot of hot water for joining the team, both from the public and Uber employees. But criticism escalated Jan. 28, when during a hour-long strike by New York City taxis in solidarity with immigrants affected by Trump’s travel ban, Uber turned off its surge pricing.  (Uber says the no-surge-pricing timing was unrelated and happened after the taxi strike was over.) The company subsequently lost more than 200,000 users after a #DeleteUber Twitter campaign.

But protesters in Pittsburgh are still upset with the ride-hailing company. On Feb. 4, a group of more than 35 protested at Denny Park in the Strip District, and then marched toward Uber’s Advanced Technologies Center (where they make and test driverless cars), located just a few blocks away.

Laura Wiens, of transit-advocacy group Pittsburghers for Public Transportation, commended Kalanick for stepping down from Trump’s advisory council, but believes the company can do more to support immigrants. Wiens said she would also like to see Uber oppose state anti-immigrant bills like SB 10, Pennsylvania’s anti-sanctuary city bill currently in the state Senate.

Uber spokesperson Craig Ewer responded to the protest with a statement sent to City Paper: "More than ever, it's important that we all support freedom of speech. Like many others, Uber strongly opposes the President's unjust immigration ban which is harming many innocent people, many of whom are drivers. That's why we created a $3 million legal-defense fund to help, and why we're offering compensation for lost earnings for any driver stranded abroad. We will continue to stand up for those being hurt by the President's executive order."

Uber also recently donated $10,000 to Women's Center and Shelter of Greater Pittsburgh to provide rides to victims of domestic abuse.

Wiens added that the group's frustration with Uber goes beyond its immigration-related policies, and PPT believes Uber has policies that hurt workers.

Sean McGrath is an Uber driver who said Uber has labor practices that hurt drivers’ ability to make money and speak out against management. Uber refers to drivers as “partners” and pays drivers as independent contractors, not employees.

“The partnership is only one-way,” said McGrath. “There is no way for us to voice our opposition.” McGrath has recently grown frustrated with how quickly the Uber app updates its “hot spots,” or highlighted areas where drivers can take advantage of surge-pricing rides. “This zones refresh every 15 seconds, so you expect to get a good pay, but then the surge disappears by the time you arrive.”

“Where is [Uber’s] commitment to the 100,000 of workers who stand to lose jobs with the emergence of autonomous cars,” said Conroy. Protesters also called on Uber to share its transportation data with Pittsburgh, as well commit to a more transparent process when working with the city and community.