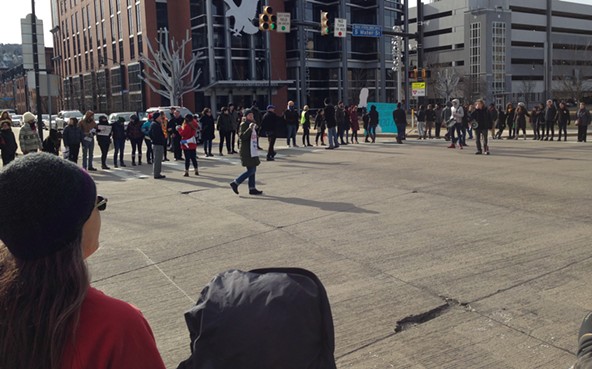 CP photo by Ryan Deto
Protesters block South Side intersection to decry Pittsburgh-area deportations
Sometime on Feb. 7, Martín Esquivel-Hernandez, a Pittsburgh resident and undocumented Mexican immigrant currently facing deportation, will likely be placed on a plane to an American border town and then bused across the U.S.-Mexican border, according to advocates involved in his case. He will be deported to the country he was born and raised in, but one that no longer has the things most important in his life: his wife, three kids and mother. Esquivel-Hernandez had no local criminal record, other than driving without a license (something he can’t legally acquire in Pennsylvania), and has been a longstanding advocate for immigrant rights in Pittsburgh.

This blow to Pittsburgh’s immigrant-rights community is tough enough to bear on its own, but according to Monica Ruiz of Latino-rights group Casa San Jose, U.S. Immigration and Customs Enforcement officers also have detained at least four more Latino undocumented immigrants this week.

In response, organizers sent out a call on Feb. 3 to organize a protest. The next day, more than 100 people gathered in the South Side to show their support for Pittsburgh’s undocumented community. “Pittsburgh stands with all immigrants, regardless of their category,” Gabriel McMorland, an activist with the Thomas Merton Center, told the crowd on Feb. 4.

“Many [undocumented immigrants] did not go to work this week,” said Ruiz. “Many did not come to [Casa San Jose] events. We have to take a stand. ICE has increased their enforcement.” In fact, Ruiz told Pittsburgh City Paper, that she actually brought an undocumented immigrant to the rally, but the immigrant decided at last moment to stay in the car out of fear he might be discovered and deported.

Ruiz said that three of the immigrants that were detained are Pittsburgh residents and work in the construction industry, and at least two of them have children who are U.S. citizens. She believes that President Donald Trump’s recent immigration orders have energized ICE to detain and deport more immigrants.

“These new executive orders, they are giving ICE a free-for-all mentality,” said Ruiz. “ICE is now more emboldened in the Pittsburgh area.”

The more than 100 protesters eventually entered the intersection of Hot Metal and South Water streets and held up traffic for several minutes. Protesters chanted, “Get up, get down, Pittsburgh is a welcoming town.”

Guillermo Perez, of Pittsburgh’s Labor Council for Latin American Advancement, while blocking the intersection, said that the inconvenience to drivers is nothing compared to what immigrants like Esquivel-Hernandez have to go through. “Martin [Esquivel-Hernandez] will never see his kids again, so yeah, the cars can wait five minutes,” he said.

When the police arrived, the protesters peacefully vacated the street. Some drivers flipped off the group, while many honked in support and gave thumbs up. According to the non-partisan public-opinion-polling nonprofit PRRI, only 16 percent of Americans believe we should identify and deport all of the country’s more than 11 million undocumented immigrants. (About 79 percent of the country believes we should give them a path to citizenship or permanent residency, if they meet certain requirements.)

Christina Castillo, of the Thomas Merton Center, spoke passionately about the need to stop deportations. “We demand that ICE stop separating our families and friends,” she said to the crowd. “Enough is enough! We need our leaders to stand with us.” 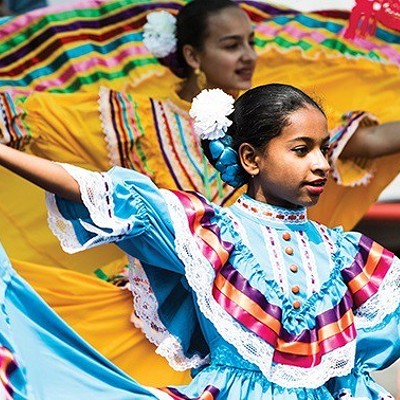