It's closing week for barebones' lively production of this unique, pro-wrestling-themed play at the Ace Hotel. But if you don't already have tickets, you'll need to go tonight, as Friday and Saturday's shows are sold out. 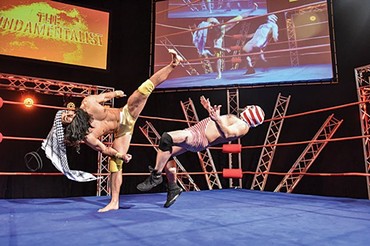 Photo courtesy of Louis Stein
The Elaborate Entrance of Chad Deity
The Obie-winning play, by Kristoffer Diaz, depicts a drama that plays out behind the scenes (and sometimes in the ring) of a fictional WWE-style wrestling league. The often-satirical story revolves around efforts to turn an Indian-American wrestler into a bearded and turbaned villain named "The Fundamentalist."

The show, complete with pro-wrestling ring, is staged in the Ace's gym. barebones usually runs shows for three weekends, but had to limit Chad to two weekends because of prior bookings at the space.

The Ace Hotel is located at 120 S. Whitfield St., in East Liberty.