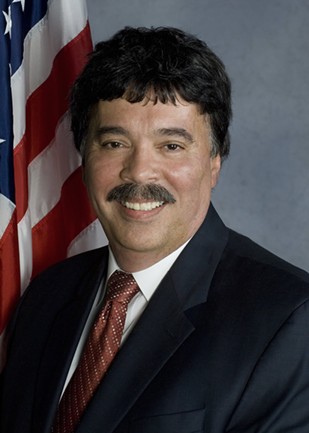 Photo courtesy of www.legis.state.pa.us
Dom Costa
Once the Pennsylvania general assembly opened its new session, many Republican lawmakers did what they have done for years: introduce bills aimed at scaring immigrants. Most of them never pass or even get out of committee, but their introduction does inform Pennsylvanians that lawmakers have their sights set on targeting undocumented immigrants.

And the start of the 2017 session showcased a doozy. HB 14 is a bill that proposes that law-enforcement personnel and employees of colleges and universities assist in immigration enforcement, and that would cut state funding for institutions that tell their employees not to communicate with federal immigration officers. Currently, any person in the U.S. can call in tips to U.S. Immigration and Customs Enforcement (ICE) department. But Antonia Domingo, of Pittsburgh's Labor Council for Latin American Advancement, says the bill “undercuts trust” between university officials and immigrant students, because many immigrant students are on student visas and some are undocumented.

(Carnegie Mellon University, the University of Pittsburgh and Chatham University have issued public statements in support of their immigrant populations, with CMU saying it will “not [be] providing immigration or nationality information on any individual unless compelled by law.”)

Bills like HB 14 are almost always backed by Republicans, but one Pittsburgh-area Democrat is taking heat for his initial support.

State Rep. Dom Costa (D-Stanton Heights) was originally listed as a co-sponsor on the bill and was the only Democratic co-sponsor. Then, at 1 a.m. on Jan. 31, Costa tweeted: “Thank you all for your concerns but I have wrongly been listed online as a cosponsor of HB14 and have requested to be removed as a cosponsor.”

Anita Boehm from Costa’s office told City Paper that Costa would not be voting for HB 14 and that it was an accident he was named as a sponsor.

“Representative Costa was inadvertently put on house bill as a co-sponsor,” she says. “He does not support the House Bill 14.”

However, some in the immigrant-rights camp are skeptical it was merely a clerical error.

In last year’s session alone, Costa co-sponsored eight bills and resolutions that targeted immigrants and refugees. For example, he co-sponsored and voted in favor of HB 1885, which seeks to strip funding from so called sanctuary municipalities (ones where local law enforcement don’t initiate contact with ICE). He co-sponsored a House resolution asking Gov. Tom Wolf to reject new Syrian refugees in the state, and co-sponsored HB 237, which requires proof of citizenship to acquire public benefits. (It was Costa’s almost constant sponsorship of anti-immigrant legislation that got him on CP’s Shit List last year.)

Sundrop Carter, of the Pennsylvania Immigration and Citizen Coalition, says there is no documented case in Pennsylvania of an undocumented immigrant receiving public benefits.

Additionally, public pressure might have been a factor in Costa retreating on the bill. Last week, McMorland spoke to dozens of Costa’s constituents, who told McMorland they were planning to contact Costa’s office to object to his sponsorship. “I know a lot of people who have called his office,” says McMorland.

Alex Hanson, of labor coalition Pittsburgh United, says that he and others called Costa’s office two days ago to object to Costa’s sponsorship of HB 14. Hanson says this is the time for state officials to stand up publicly for immigrant rights.

“There is a very clear choice, for elected officials to choose what side they are on, and we need them to publicly and physically be on the side of immigrants in our community,” says Hanson. “We are glad that [Costa] removed his sponsorship and we look forward to him standing up for the immigrant community.”

McMorland agrees. He would like to see Costa take a firmer stance in protecting immigrants. “I don't think that any of his constituents are reassured that he claimed to make a mistake,” says McMorland. “I think people want to hear that he will protect immigrants in Pennsylvania.”

One of those immigrants is Maria Duarte. She is a student at Chatham University, just one mile outside of Costa’s district, and an undocumented immigrant from Mexico. Duarte is a recipient of the Deferred Action for Childhood Arrivals (DACA) and is protected from deportation, but President Donald Trump has been noncommittal on whether he will end that program.

Duarte says that Chatham has provided a feeling of protection in this era of uncertainty.

“I feel that being at a university is such a safe place, it empowers you to come out of the shadows,” says Duarte. “[HB 14 is] forcing universities to not be inclusive. I don't understand how this would empower anyone.”

Duarte worries that bills like HB 14 are showing that anti-immigrant attitudes are spreading from a national stage, down to state and local levels. “I think this just goes to show that the bigotry is not just on a national level, but something that is happening everywhere.”

HB 14 is currently in the state House’s State Government committee, run by Daryl Metcalfe (R-Cranberry), one of Pennsylvania’s most outspoken supporters of anti-immigrant legislation.

Information on state legislation and representatives can be found at www.legis.state.pa.us.