A Conversation with "H is for Hawk" author Helen MacDonald | Blogh

A Conversation with "H is for Hawk" author Helen MacDonald

On Monday, Pittsburgh Arts & Lectures welcomes Helen Macdonald. The English writer made a stunning debut in 2015 with her genre-crushing book H is for Hawk, named one of the ten best books of the year by the New York Times. Partly a memoir of bereavement after her father’s sudden passing, the book weaves in essays on nature and our relationship to it, as well as a mini-biography of the author T.H. White. CP recently sent her some questions via email. 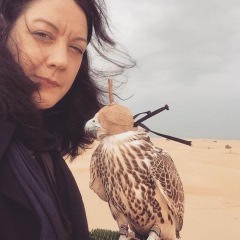 CP: At the center of this book is the story of losing your father and how you handled your bereavement. But the book can be found in the Nature section at Barnes & Noble. How did the unusual structure of the book come about? Was it intentional?


Macdonald: It was! The book is a hybrid of several different genres — grief memoir, nature writing, literary biography — and that has caused booksellers quite a bit of confusion over how to classify it. Apart from the "nature" section, I’ve seen it shelved in "family," "biography" and "hunting" sections and, on one memorable occasion, the "self-help" section.

And yes, the structure was very much planned. I wanted to mess with our familiar genres. Partly because I was getting impatient with the usual nature-writing mode, that of a single (usually male) mind walking out into the wilderness and explaining it to the reader. I wanted more voices in there, to try and capture the sense that there are many different ways of looking at the world around us, and how thankful we should be for that.

But there were other reasons, too. One of the things the sudden death of a loved one does is shatter the narratives that you tell yourself about the way the world works. The book starts with a chapter that’s fairly straight nature writing. Then there’s a chapter of grief memoir, and shortly after that one about the writer T.H. White. After that, all those different genres start to crash into one another, converse with one another, crumble, and get reworked as the book goes on. That was always the intention.


I found one of the most enlightening aspects of your book to be the discussion of the way class systems arrange everything into hierarchies, even within a pursuit as obviously aristocratic as falconry. Peregrines are considered finer birds than goshawks, and falconers nobler than austringers. You write: “It took me years to work out that this glorification of falcons was partly down to who got to fly them.” It made me wonder if class hierarchies hadn’t been imposed on nature itself. Do you think there is something to the idea that all around the world, those who have access to nature, or “pristine” wildernesses, are often higher up on the class ladder?

It works with animal-keeping too. Over here, there’s a long history of working-class communities keeping native British finches for their colour and song: bird-keeping immigrants, travelers and gypsies, men in mining communities. Today it’s generally frowned upon to keep such birds. But it’s fine to keep British waterfowl — ducks and geese — partly because they’ve traditionally been kept by the aristocracy on their country estates. That’s just one example of how society invisibly informs what we think of as the right or wrong ways to interact with the natural world.


CP readers are mostly city folk. Do you have any recommendations for readers who loved your book and wish to be introduced to more nature writing?


So many! If you’ve not read Aldo Leopold’s Sand County Almanac, I cannot recommend it too highly. If you want lyrical nature red in tooth and claw, J.A. Baker’s The Peregrine is a masterpiece. Read Annie Dillard and Barry Lopez too, and go exploring in the bookshelves of your local library or bookstore. There are so many superb works of nature writing out there.

Helen Macdonald speaks at the Carnegie Music Hall at 7:30 p.m. Monday. Tickets are $15-35 and are available here.

The Music Hall is located at 4400 Forbes Ave., in Oakland.

Pittsburgh's first Art Exchange this Sunday at the Mine Factory