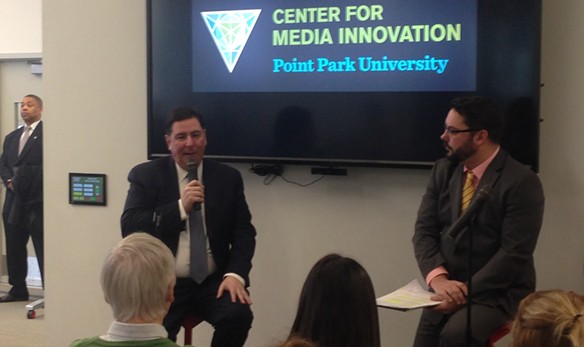 “The one thing that I wasn’t expecting when I was running for mayor, and one of the greatest rewards, has been the relationship between the White House and the city of Pittsburgh,” said Peduto of the Obama administration. “We were in direct contact with them every week.”

Peduto said he enjoyed the direct link that existed between Pittsburgh and the White House, and that, with President Donald Trump’s administration, he “hopes they continue that.”

“There are going to be philosophical differences between the leaders of American cities and the White House,” said Peduto. “But that doesn’t mean that initiatives that can help people can’t also happen.”

However, Peduto expressed some of the uneasiness that many big city mayors feel towards President Trump, considering many of Trump’s campaign promises run counter to the more inclusive agenda that most big cities have adapted.

“I am an eternal optimist. I try to believe that there is good in every person and that there will be some good that will be able to come out of the next four years. But at the same time we are preparing if there isn’t … the city can’t stop moving forward.”

In terms of Trump’s promise to deport millions of undocumented immigrants, Peduto said that while Pittsburgh hasn’t officially declared itself a sanctuary city (where local law enforcement refuse to communicate with federal immigration officers in order to maintain trust with immigrant communities), the policies of local police are in line with sanctuary policies, and that isn't going to change.

“Right when we got in office in 2014, we stopped asking for documentation from people,” said Peduto. “Our Pittsburgh police have been doing what sanctuary cities are doing now for the past three years. If that gets challenged and if funds are threatened to be taken away by the federal government, then we will join the other cities around this country and take it to court … and we will win.”

Peduto also talked about his hiring of former Police Chief Cameron McLay and the reforms his administration has brought to the police department. These include a focus on improving community-police relations and moving the city’s internal investigating unit out from under the police department. Trump has suggested that police officers need to institute a stronger emphasis, on "law and order,” something advocates argue runs counter to Pittsburgh’s policies.

However, things turned a little Trumpian (in terms of his combative relationship with the press) when Peduto was asked about a potential ethics violation stemming from a Pittsburgh Post-Gazette article detailing how large developers in the city were solicited by Kevin Acklin, Peduto’s chief of staff and chair of the Urban Redevelopment Authority, to donate funds to Peduto’s campaign.

Peduto said the article was “very unfair” and defended the actions of Acklin because conversations between Acklin and developers “showed absolutely no favoritism” and that is was not a “pay to play” situation.

“The story was all sizzle and no steak,” said Peduto. “When writing a story like that you usually chase [what the outcome is]. In this case … you can't say, 'no, there isn't anything there, lets just go ahead and report it anyway because it doesn't look good.' I think that is a line that journalists need to watch very closely.”

Later in the panel discussion, Peduto again expressed his disappointment with the Post-Gazette story, but defended freedom of the press and said “that reporter has every right to write that article.”

“I haven’t had a chance to talk to the writer yet, and I have known him for over 20 years, and it won’t affect our relationship,” said Peduto. “The next time he calls and needs something for a story, he is going to get it. If you are so thin skinned, that you start blasting reporters and saying ‘no I won't take your question’ … you’ll lose.”

One last look: A slideshow of the Pittsburgh Steelers AFC Championship loss to the New England Patriots

Uber donates $10,000 to the Women's Center and Shelter of Greater Pittsburgh