The long-awaited North Side bookstore specializing in works in translation and world literature opens tomorrow with attractions including an all-ages children’s story hour at 11:30 a.m. 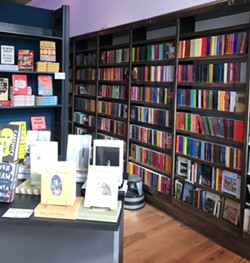 Stopping by earlier today, I also spotted contemporary fiction and nonfiction, and works by such local talents as poet Terrance Hayes.

City of Asylum, founded in 2004, is a nonprofit that shelters and supports writers persecuted in their home countries. It also offers a year-round slate of readings, concerts and other cultural events.

The book store's grand opening tomorrow will include discounts, giveaways, coffee and snacks, and more.

It will not, however, be the first official public event at Alphabet City. In keeping with City of Asylum's international mission, that milestone occurred just a couple hours ago, with the swearing-in of 18 new American citizens from 13 countries by U.S. Immigration and Customs Enforcement officials. Among the new citizens was Silvia Duarte, the native of Guatemala who is City of Asylum’s assistant director and also managing editor of its online publication Sampsonia Way.

Starting next week, says Rains, it will keep regular hours of 11 a.m.-7 p.m. Tuesdays through Saturdays, and noon-4 p.m. Sundays.