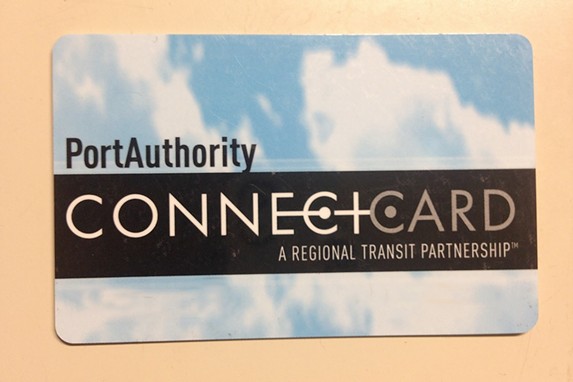 CP photo by Ryan Deto
Grab your free connect card before 2016 ends.
Starting New Year's Day (Sun., Jan. 1, 2017), there will be a slew of changes coming to how riders pay for and ride on Port Authority of Allegheny County buses and light-rail cars. Most riders have probably been reminded hundreds of times by the media, Port Authority advertisements and bus drivers themselves, but Pittsburgh City Paper thought it prudent to offer one final reminder.

Also, Fri., Dec. 30, and Sat., Dec. 31, are the last days to get a free ConnectCard at the Downtown Port Authority Service Center at 534 Smithfield St., participating Giant Eagle grocery stores and a lots of other locations. ConnectCards will cost $1 starting Jan. 1, 2017. And you'll want to have one, because the cash fare is rising from $2.50 to $2.75; ConnectCard users will pay $2.50.

Since the $3.75 Zone 2 fare charge is being scrapped and all fares will be $2.75 or less, the changes should provide a boost to some suburban riders who rely on the bus to get around. And there are also some policy changes that could help riders with disabilities.

All the changes are outlined below: