Photo courtesy of Adam Shuck
This September, the Pennsylvania Department of Transportation installed two new traffic signals at two corners of Butler and 46th streets in Lawrenceville. The new poles were installed smack dab in the middle of the sidewalk.

The community was quick to criticize the placement, saying that the poles now obscure access for pedestrians and people with disabilities in what has become one of the city’s most popular walking districts.

“Without telling or asking anybody, [PennDOT] just put them in the center of the sidewalk,” says Will Bernstein of Better Streets Lawrenceville, a local bike/pedestrian group. “There is a reason we have sidewalks: so people can have an unobstructed path for walking. And for people with disabilities, these poles can be especially problematic.”

Advocates have reached out to neighborhood group Lawrenceville Corporation, bike/ped advocacy group Bike Pittsburgh and Pittsburgh City Councilor Deb Gross, and all have gotten behind the call to move the poles or redesign their placement.

PennDOT however, has yet to give a solid response to the community. Bernstein says that PennDOT has indicated that utility lines would make it difficult and expensive to move the poles, and Eric Boerer of Bike Pittsburgh says PennDOT may be considering a redesign with sidewalk “bump-outs,” but no commitment has been made.

PennDOT Pittsburgh district office spokesperson Steve Cowan wrote in an email to Pittsburgh City Paper that “the installation is not complete” and PennDOT is “investigating potential changes at the intersection to address [Americans with Disabilities Act] accessibility.”

Regardless, the community is taking their advocacy to the next step: satire. According to a photo taken by Adam Shuck, curator of the popular Eat That Read This newsletter, Signs were recently taped to one of the poles, deeming it the “PennDOT Festivus Pole.” (Festivus is an imaginary holiday from the popular '90s sitcom Seinfeld, in which a pole is meant to replace a Christmas tree and celebrators are encouraged to air their grievances with their family and friends.) 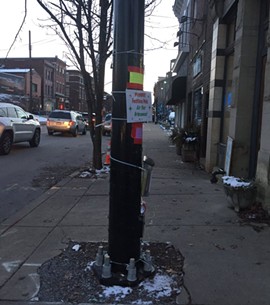 Photo courtesy of Adam Shuck
Traffic-signal pole on Burtler Street
It's unclear who exactly put up the sign, but the PennDOT Festivus Pole also asks community members to “air their grievances” and so far at least one grievance has been taped to the pole. It reads: “This enormous pole is blocking the access ramp & sidewalk. You need to adopt a different standard for cities.”

Lawrenceville community groups agree with this sentiment. Bernstein says this is “another example of PennDOT engineering for highways, not neighborhoods.”

(Last year, PennDOT attempted to install a center-line rumble strip, which are typically installed on rural highways, on Butler Street in Lawrenceville before state Sen. Wayne Fontana and others stepped in and got PennDOT to nix the project.)

“The pole itself is completely incompatible with what we are trying to do, and goes against Complete Streets design,” says Lawrenceville Corporation director Matt Galluzo, referencing the city’s recently passed legislation that encourages roads to give equal access to cars, bikes and pedestrians. “We are talking about a dense urban environment; it’s not comparable to a suburban highway.”

Galluzo, however, is hopeful that the poles will be addressed soon and says that “PennDOT has been willing to talk about the issue.”