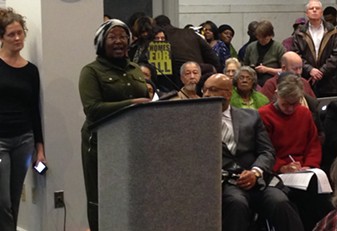 CP photo by Ryan Deto
Advocate speaking out in opposition to LG's proposed redevelopment of Penn Plaza.
On Dec 13, at a Pittsburgh planning commission public hearing, there were some new faces present in the ongoing battle over the development of the Penn Plaza complex in East Liberty. In June 2015, hundreds of Penn Plaza residents were given 90-day eviction notices by the building’s owners, LG Realty.

The 312 apartments that made up Penn Plaza were some of the last non-subsidized, below-market rate housing in all of East Liberty. As a result, Pittsburgh Mayor Bill Peduto stepped in and helped negotiate a deal that led to dollars for the affordable housing trust fund, Penn Plaza residents received relocation assistance and LG was allowed to redevelop the property.

Throughout this process, there have been many familiar faces: neighbors from nearby single-family homes focused on the future of Enright Park (the small public park in the center of the Penn Plaza site), housing advocates from Action United and Homes for All Pittsburgh, and developers from LG.

But at the Dec. 13 public hearing to discuss the preliminary plans for LG’s new development, which includes a controversial expansion by Whole Foods, a dozen new faces emerged, and all were from Rodman Street Missionary Baptist Church, which is located near the Larimer-East Liberty border. And while at past meetings the majority of East Liberty residents have been opposed to LG’s plans, because they say the neighborhood can’t stand to lose any more affordable units, the Rodman Street group was solidly in favor of the new development due to its contribution to East Liberty’s affordable-housing fund.

“We think this project will help us, through the affordable housing trust fund,” said Rev. Darryl T. Canady of Rodman Street to the planning commission. “We are here to support this.”

After the pastor spoke, about 12 of his parishioners, some who had lived in Penn Plaza before part of it was torn down, spoke in favor of the development and the affordable-housing trust fund. (In September 2015, the Urban Redevelopment Authority created an affordable-housing trust fund for East Liberty, which is generated from tax increments of select developments in the neighborhood. Penn Plaza was added to that list of projects when the city reached a deal with LG in late September 2015.)

However, many of the parishioners merely said they support the pastor and some called the trust fund the “affordable care trust fund.” Some opponents of the development said they felt LG was trying to "manipulate" the planning commission. And Michael David Battle, a local housing advocate, exclaimed at the meeting, “they don’t even know what [the fund] is called!”

LG’s attorney Jonathan Kamin rejects the idea that his client is unfairly manipulating the planning commission and said one group doesn’t have a monopoly on community engagement. “Our community outreach has been significant and involves talking to neighborhood groups and churches,” said Kamin. “And we’re happy to have built a consensus and support for our project.”

Before the start of the public hearing, a City Paper reporter saw LG president Lawrence Gumberg, talking to the group of parishioners and overheard the developer say, “bottom line, we get the tax break, then we contribute to the affordable housing trust fund.” After the meeting, Rev. Canady said that Gumberg approached him a “few months ago” to detail the Penn Plaza development and the affordable-housing trust fund.

East Liberty resident Arthur Allen spoke in opposition of LG’s plan at the meeting because of its lack of affordable units. He also objects to the redesign of the city-owned Enright Park. He says he believes LG is trying to manipulate the planning commission by “trying to change the tone for the entire project,” instead of meeting with residents like himself to come to a shared vision.

“It’s over a year later and we are not seeing what should take place,” said Allen after the meeting. “If you are on the planning commission, you should be able to see right through [what LG] is trying to do.”

During the meeting, Kamin outlined in detail how LG had met every obligation required by the city and said the project will contribute $10-12 million for the affordable housing trust fund over 10 years. He also said that as the development is designed right now, all of the 400 proposed units will be market-rate.

Pittsburgh Commission on Human Relations’ director Carlos Torres said generally the commission feels that future housing developments should include affordable-housing units, so  they don't violate the U.S. Fair Housing Act. “Housing developments that perpetuate segregation or that effectively exclude members of protected classes cannot be found to create a favorable social impact,” said Torres in a statement released after the meeting.

But Kamin said that LG would have to acquire federal and state funds to create affordable units, which they are not currently seeking. According to the agreement forged between the city and LG in 2015, LG is not required to include affordable units in their new development.