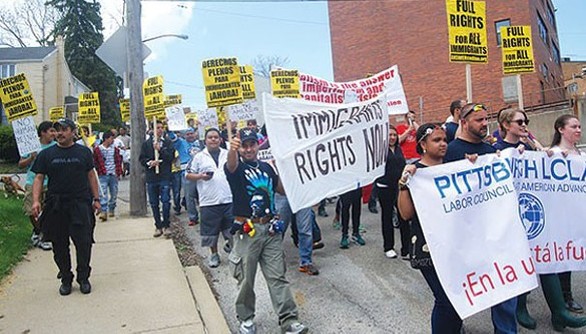 CP photo by Ryan Deto
Martin Esquivel-Hernandez (center) at an immigrant-rights rally the day before he was detained.
The fate of a Pittsburgh undocumented immigrant facing deportation could all come to a head tomorrow, Dec. 8.

Martin Esquivel-Hernandez, originally from Mexico, was detained in May by U.S. Immigration and Customs Enforcement (ICE) and faces possible deportation after his federal sentencing hearing concludes at the federal courthouse in Downtown Pittsburgh.

Esquivel-Hernandez’s lawyer has negotiated a plea deal for him, that if accepted, could lower his felony re-entry charge to a misdemeanor. Esquivel-Hernandez was detained this year after attempting to enter the country illegally four times between 2011 and 2012. His family had already immigrated to the U.S. and he was attempting to reunite with them.

Since, he has lived in Pittsburgh with his wife for more than four years, where the couple have three children, including his U.S.-born son, who attend public school. He has also become an advocate for Pittsburgh’s Latino community and is active in two local churches.

If his plea deal is accepted, his advocates are hoping ICE will drop the detainer against Esquivel-Hernandez and he could return home directly after his federal hearing concludes at 1:30 p.m.

However, ICE indicated to Pittsburgh City Paper last month that they will not drop Esquivel-Hernandez’s detainer. For this reason, his advocates are calling for supporters to come together and rally outside of the federal courthouse tomorrow to demand that he not be turned over to ICE.

“Martín should have never been detained in the first place,” said Guillermo Perez, president of the Pittsburgh Labor Council for Latin American Advancement (LCLAA), in a press release. “He wasn't a priority for enforcement the day he was taken, and he still isn't a priority under the terms of this plea deal.”

Under the Obama administration, the priorities for deporting undocumented immigrants include being suspected of terrorism plots, involved in gangs,convicted in “aggravated felonies,” and other offenses. Jennifer Williams, Esquivel-Hernandez’s pro-bono immigration attorney says he doesn’t fit into any of the listed priorities.

“If you follow the ICE guidelines, [Esquivel-Hernandez] should not be a priority for removal,” says Williams.

So why was he detained? In April, Esquivel-Hernandez was cited for driving without a valid license by Mount Lebanon police, who then contacted ICE, who felt compelled to detain him because of his multiple re-entries. Also, stats from Syracuse University show that ICE officials consistently ignore the priority guidelines.

If ICE doesn’t drop Esquivel-Hernandez’s detainer, Williams says he could be thrown into the deportation process almost instantly and they will only keep him in custody “long enough to facilitate his removal.” Williams details that this could take a matter of weeks with Esquivel-Hernandez being shipped from detention center to detention center with little notice to his family and representation.

According to Williams, because Esquivel-Hernandez previously received an immigration hearing when he was caught at the border (an extremely expedited process where it’s normal to have 60 to 100 cases prosecuted in one day, according to Carlos Garcia, of the Puente Human Rights Movement, a Phoenix-based migrant-justice group), Esquivel-Hernandez can be removed from the U.S. without seeing an immigration judge.

Regardless, Williams says she will advocate for him to receive an immigration hearing if Esquivel-Hernandez’s ICE detainer isn’t dropped.

“Its very important that ICE give him due consideration,” says Williams. “To really consider the facts. To consider his family and come to a conclusion that this would really hurt a family.”