With the theme Pittsburgh: The Next 200 Years, this annual New Year's Eve program celebrates the city’s bicentennial for one last night before looking toward the future. 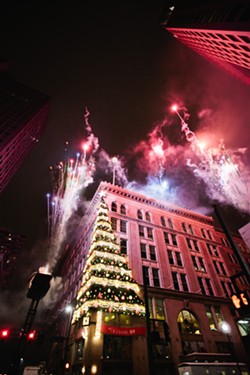 The countless indoor and outdoor performances, exhibits and events spread throughout Downtown now have an expanded footprint over 14 square blocks. Also new is the location of the Highmark Stage, now at the corner of Penn Avenue and Stanwix Street. The stage will be the venue for the headlining Nigel Hall Band. The nationally touring soul and R&B group will kick off its set at 10:45 p.m., leading to the rising of the Future of Pittsburgh Ball and the Grand Fireworks Finale at midnight.

Others new events include the Pittsburgh Comedy Festival's Comedy Showcase, in the CAPA School Auditorium, hosted by Andrea Wetherald, at 9 p.m. There will be a silent disco with DJ Hatesyou in the lobby  of the August Wilson Center at 6:30 p.m as well. The Fire and Ice Plaza, featuring live ice-sculpting and fire performers, has also moved, to Ninth and Penn.

Elsewhere, the Dollar Bank Stage returns to Seventh Street to host music acts, and there will be an additional outdoor stage at Eighth Street and Penn Avenue, with DJ Big Phil.

The evening's events begin at 6 p.m. with the Dollar Bank Children’s Fireworks on the Highmark Stage and a performance by The Jazz Lab, featuring student musicians of the Afro-American Music Institute.

The FedEx Ground Parade, a staple of First Night, starts at 8 p.m. at the David L. Lawrence Convention Center and heads down Penn. In addition to many activities for children and adults, all Pittsburgh Cultural Trust galleries will offer extended hours along with three additional galleries in the Wilson Center.

$10 admission buttons give you access to some 100 indoor and outdoor activities, and can be purchased in advance online, at 412-456-6666, or at participating Giant Eagles. Children 5 and under are free. For some shows and concerts, you must register and reserve free seat vouchers online. Seating for vouchered events is first-come, first-served.

Highmark First Night to hop into the New Year with giant rabbits, fireworks, and more