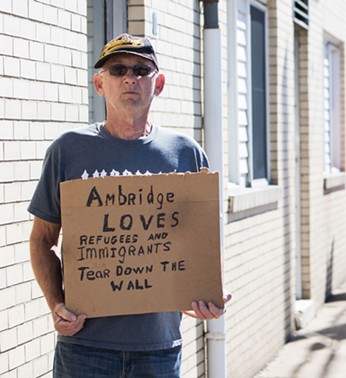 CP photo by Luke Thor Travis
A protester during Donald Trump's visit to Ambridge
There has been a lot of media attention lately about how President-elect Donald Trump’s Election Day victory was due in part to his insanely busy campaign schedule. Pundits have speculated that his focus on visiting many declining, white working-class towns helped the billionaire connect to those voters and swing many of them from their Democratic Party roots to vote for him. For example, a Washington Post article recently showed that most of his campaign stops were to Rust Belt swing states, and he won all of those states.

But analysis of some Southwestern Pennsylvania voting districts throws a wrench in that theory. While Trump won Pennsylvania by about 44,000 votes, his appearances at declining, white working-class towns, like Ambridge, Monessen and Johnstown, didn’t actually lead to victories there.

In Ambridge and Monessen, he still lost by 12 points and hundreds of votes to his Democratic opponent Hillary Clinton. In Johnstown, the race was much closer, but Trump still failed to get a majority or plurality of its 6400 voters and Hillary Clinton still beat him by 1 point.

The one town that Trump visited and won in Southwestern Pennsylvania was Moon Township. (Trump held rallies at Pittsburgh International Airport in July and November and the airport is located in Moon.) He won by 10 points there, but the township historically votes Republican and is hardly a working-class enclave. Moon is home to many white-collar office parks and its median household income is $57,000; Johnstown’s median household income is $24,000.

A look at the areas immediately outside the declining towns may provide an answer to where the real voter surge was occurring: in the wealthier neighbors of the declining towns. Take Ambridge, the former company town that once housed the American Bridge Company and had 20,000 residents at its peak. In Economy Borough, Baden and Harmony township (the municipalities bordering Ambridge), voters gave Trump between a 15-20 point victory.

Though not considerably thriving, it’s difficult to label these surrounding areas as downtrodden as Ambridge. All three municipalities are wealthier than Ambridge (Economy's average household income of $52,000 is more than twice that of Ambridge). And while Baden and Harmony have lost a couple thousands residents since their peak, their loses pale in comparison to Ambridge, which has lost more than 13,000 residents since its peak in the 1930s.

It should be noted, that Trump did make GOP gains in Ambridge compared to 2012’s Republican candidate Mitt Romney, who lost by 18 points (Trump lost by 12). But voter turnout of the more well-off Baden, Harmony and Economy must be considered too. The three municipalities average turnout was about 78 percent in 2016, a 4 percent jump compared to 2012. Ambridge's 2016 turnout was at 62 percent, only a 1 percent gain compared to 2012.

Trump visited and energized the declining, white working-class towns of Southwestern Pennsylvania during the 2016 campaign, but it might have just been those town's wealthier neighbors that helped propel him to a Pennsylvania victory.