With the goal of broadcasting on the FM band, 24-hour jazz station WZUM-AM approaches its Dec. 31 fundraising deadline | Blogh

With the goal of broadcasting on the FM band, 24-hour jazz station WZUM-AM approaches its Dec. 31 fundraising deadline

Last spring, Pittsburgh City Paper reported on WZUM-AM, which brought 24-hour jazz programming back to the airwaves — on the radio band known better for talk shows, no less. The station is operated by Pittsburgh Public Media, an all-volunteer organization that includes former staff members of WDUQ-FM like Tony Mowod and Scott Hanley, as well as veteran Pittsburgh sports broadcaster Bill Hillgrove.

Located at 1550 AM (and streaming at www.pghjazzchannel.net), WZUM operates as an initial step that will hopefully result in a high-watt counterpart on the FM band.
click to enlarge 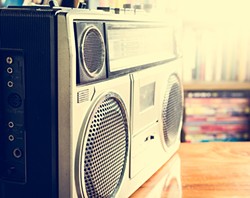 The station has since received on-air advertising from the Pittsburgh Cultural Trust. Local musicians and even political figures like Jim Roddey can be heard between songs, endorsing the station and asking listeners to donate to keep progress happening toward the FM station. And every day, more listeners have answered the call.

“The more people discover us, the more they’re like, ‘Oh, wow, look at this. This is incredible!’ And they donate,” says Chuck Leavens, president of Pittsburgh Public Media and an on-air personality himself, who can be heard throughout the day during the week.

But now it’s getting to be crunch time. By Dec. 31, PPM needs to close on the purchase of a license that will bring the station to the FM band at 101.1. “Our license, [which] we purchased ... from the State University of New York, just outside of Ithaca, is a translator license that had never been put on the air,” Leavens says. “The State University of New York agreed to sell it to us. And we need to finish paying for that and close on it so we can go to the next step of building [the station].” Donations continue to come in daily, but at press time, PPM remained about $28,000 short of the amount needed for the close.

If the funding goal isn’t reached, Leavens says, a few options remain. PPM might be able to negotiate an extension on the deadline. As a worst-case scenario, PPM will continue on WZUM-AM at 1550 AM. It will also continue to broadcast on the FM dial at 88.1, courtesy of a license purchased from Bethany College, though that signal reaches only through the Ohio Valley.

But rather than back-up plans, Leavens prefers to talk about the next steps in the process: building a station with a transmitter and an antenna 1,000 feet tall. “There’s no station in town that has their signal coming from that height,” he explains. “And the trick with FM is that height is everything. You have height and you look down onto all the areas. That allows you to make a larger signal.”