If you’re a dance fan in Pittsburgh, I probably don’t have to tell you about Attack Theatre. The city’s most tenured independent contemporary-dance company is also perhaps its most ubiquitous, with frequent site-specific shows, community performances, and collabos with other arts groups supplementing its own theatrical season. 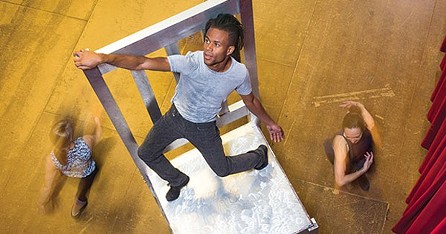 Photo courtesy of Renee Rosensteel
Anthony Williams (foreground) rehearses Attack Theatre's "Unbolted"
But just in case you needed a reminder, the troupe’s latest full-length work served notice that Attack remains an important creative force in town, and arguably just keeps getting better. Unbolted is an ambitious yet accessible three-act show — as well as Attack’s first ever performed in the round, at its home base, at Pittsburgh Opera headquarters, in the Strip. (Here’s Steve Sucato’s preview for CP.)

Act one found the company’s five dancers interacting with each other and a couple of simple props — first a road map, and then an impossibly long piece of elastic line. In the second act, Kaitlinn Dann, Dane Toney, Anthony Williams, Ashley Williams and Sarah Zielinski played a very sophisticated game of musical chairs. And in the third (with inventive live accompaniment by percussionist Ian Green), the prop was a single huge chair, a work in aluminimum that after being assembled onstage stood 5 feet at seat level (with its backrest doubling that height).

As choreographed by co-artistic directors Michele de la Reza and Peter Kope, the group dances, duets and solos flowed beautifully to a soundtrack that ranged from dance-club beats to Appalachian fiddles and, in a recurring motif, what sounded like a soccer chant. Built from gesture and fleeting implied narratives, punctuated with moments of athleticism, the acts played out as a series of cinematic scenes – 90 minutes’ worth, broken up only by two short intermissions — that turned on a dime from antic to somber.

Unbolted’s four-performance run is over. (I saw the final showing, on Saturday night.) But keep it in mind when Attack returns with its next new show, in the spring.

Dance if you want to aboard the Attack Theatre boat party