On Nov. 29, hundreds of protesters took to the Downtown streets demanding that local fast-food restaurants, Giant Eagle grocery stores, and UPMC hospitals increase their minimum wages to $15 an hour and allow workers to form unions. The march was part of a national Day of Disruption, where cities across the country are protesting workers rights.

More than 200 marchers shut down Liberty Avenue outside of the federal building and marched throughout Downtown to the McDonald's restaurant on Stanwix Street where CP News Editor Rebecca Addison reports some protesters were arrested.

Right before the march started, traffic was disrupted and more than 20 buses lined up on Liberty Avenue waiting for the march to start. More than a dozen police officers were present during the march. They provided escort for the marchers on motorcycles and bicycles. None were in riot gear. 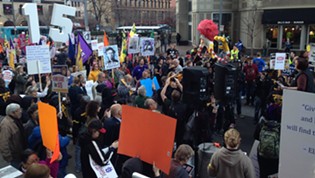 CP photo Ryan Deto
Protesters fill Liberty Avenue, Dowtown
march about the frustration with stagnant wages for workers in the service industry. “Enough is enough with business as usual,” said Grayson. He also expressed anxiety that the group’s fight will be even harder when President-elect Donald Trump assumes office in January. “Our future president has declared that the current minimum wage is too high.”

One of the workers to walk off the job today to protest was Erika Lee, a shuttle bus driver for UPMC who currently makes $13 an hour. She lives in Mckeesport with her three children. Lee said she had to take a stand to fight for her and her co-workers’ rights, specifically allowing them to form a union, which UPMC has blocked for years.

“There has been no progress on forming a union,” said Lee. “There is constant intimidation. Many of us stood up today, but not all of us. Some of us, they feared retaliation.”

Linda Zinkhan works at the Market District Giant Eagle in Robinson Township. Her catering department recently joined United Food and Commercial Workers Local 23 and was drawn to protest because of the hardships she and six other employers went through in joining UFCW. Zinkhan said that management stalled contract talks and made workers attend anti-union meetings.

“It has been a clawing fight,” said Zinkhan.

Giant Eagle to limit number of shoppers allowed in stores