City Government LGBTQ Keeping Up With the Council 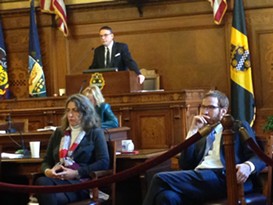 Kraus says it never went as far as his parents sending him to “conversion therapy,” the practice of using therapy or spiritual healing to change a person’s sexual orientation from gay or bisexual to straight, but he fears that people and families are vulnerable to this practice.

“The City of Pittsburgh bears the responsibility to protect all of its residents and this legislation defends LGBTQIA+ youth against the destructive psychological and physical impact of forced conversion therapy,” said Gilman in a press release. “By passing this legislation, the City is standing up for equality and ensuring that Pittsburgh is a welcoming city for all.”

Kraus says he wanted to introduce this legislation now because of articles detailing the LGBT-related positions of some of President-elect Donald Trump’s cabinet members “absolutely terrified” him. (Vice President-elect Mike Pence supported government-funded conversion therapy while serving in Congress in 2000, and has not disavowed that support.)

“One of the things that scares me about this public acclimation of the possible appointees of the new administration would be to redirect funding from HIV patients in critical need, and take that money and redirect it into conversion therapy,” says Kraus. “I find this to be Neanderthalic in thought.”

(In a boon to advocates for HIV treatment, today Pittsburgh City Council also passed unanimously a will of council that urges all doctors to test for HIV during all routine visits.)

Kraus says that support of conversion therapy from the Trump administration might give support to homophobes and others who attack LGBT people, such as how Trump’s victory emboldened some to bully and harass minorities, refugees and immigrants. Kraus says this legislation is a call to the LGBT and their allies that Pittsburgh is a safe place for them.

Six states, including California, Illinois and New Jersey, have passed conversion-therapy bans for minors. In the last year, other cities have followed suit, like Cincinnati, Miami Beach and Seattle. Kraus says that Pittsburgh has always been a leader in protecting LGBT-rights and says he expects “full support from council” on the passage of the bill.

Kraus adds that he has conferred with legal council and believes the ordinance will hold up, if challenged in court.