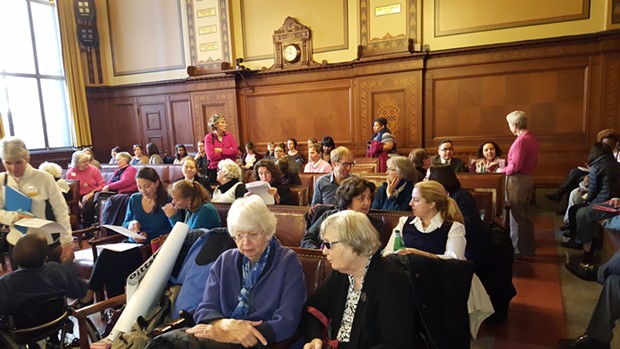 CP Photo by Rebecca Addison
Dozens filled Pittsburgh City Council chambers for a public hearing on gender equity
For years, international rankings have been bursting the United States' bubble of superiority. The U.S. ranks in the middle of the pack of developed countries in science and math. According to the World Health Organization, our health system ranks 37th out 190. And we're not even ranked in the top 10 for freedom; we're ranked 20th.

So it should come as little surprise that the U.S. isn't ranked in the top ten for gender equity either. We're 28th. And when it comes to gender pay equity, America ranks 74th. Here in Allegheny County, women make 68 cents for every dollar a man makes.

Yesterday's Pittsburgh City Council special meeting and subsequent public hearing centered around city legislation to adopt the Convention on the Elimination of all Forms of Discrimination Against Women (CEDAW), an international treaty adopted in 1979 by the United Nations General Assembly. While CEDAW has not been adopted by the United States (and only 6 other U.N. countries, including Iran), cities across the country have adopted elements of the treaty.

"It allows us to examine issues related to gender," said Sara Goodkind, a professor with the University of Pittsburgh School of Social Work, at yesterday's meeting. "The CEDAW ordinance gives Pittsburgh the opportunity to be at the forefront of equity and inclusion work."

Cities that have passed similar ordinances have seen results like more equitable workplaces and lower incidences of domestic violence. San Francisco's CEDAW ordinance was credited for the elimination of domestic homicides for a record 44 months in a row from 2010 to 2013. For the past three years, Allegheny County has had the most domestic violence related homicides of any other Pennsylvania county.

"A gender analysis is an excellent step to addressing gender inequities," said Barbara Grover, of the Sierra Club who testified at the public hearing. "We certainly have made progress over the last 60 years, but equity in all areas of women's lives has not been achieved."

The legislation calls for the creation of a Gender Equity Commission which would conduct gender analysis of issues like education, violence, economic development, and city services. The commission would also work with city government to educate employees about these issues, identify inequities, and take steps to eliminate systemic discrimination.

"What I think our challenge is going to be is how do we take this from an academic perspective and make it practical for people," said Councilor Natalia Rudiak who sponsored the local legislation. "Let's look at economic development projects that are receiving public dollars. Is there a gender pay gap in those projects that are receiving public dollars? I want to emphasize that when we talk about this, we need to tease out these real life examples."

During the time Pittsburgh City Paper observed yesterday's discussion on gender equity in council chambers, only councilors Rudiak, Deb Gross and Darlene Harris were in attendance. All three voiced support for the legislation.

"I have millions of dollars of development in my district," Gross said. "What does that look like with gender analysis."

Studies have demonstrated that international economies can benefit from implementing CEDAW. According to a report by United Kingdom advocacy organization Action Aid, women could increase their income globally by up to 76 percent if the employment participation gap and the wage gap between women and men were closed. The group says this would have a global value of 17 trillion U.S. dollars.

"Unequal pay serves as a barrier to not only coming out of poverty but breaking the cycle of poverty that so many of our families ourselves in," Carlow University student Traci Johnson said yesterday. "Women need economic opportunities that provide family sustaining jobs. These polices will aid in eliminating the fear and anxiety that many women feel when trying to provide for their families."