Pittsburgh undocumented immigrant could be released from detention next month | Blogh 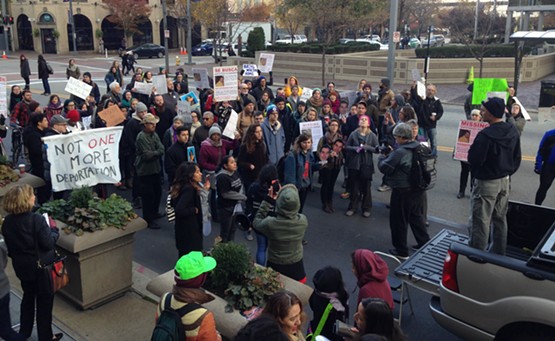 CP photo by Ryan Deto
More than 100 protesters fill Liberty Avenue in Downtown Pittsburgh to demand that Martin Esquivel-Hernandez be released.
The fight to keep Martin Esquivel-Hernandez, an undocumented immigrant from Mexico, in Pittsburgh may be turning. Esquivel-Hernandez has been detained in a private, for-profit prison in Youngstown, Ohio, for more than six months. He has no prior criminal record, has been an advocate for immigrant rights here in Pittsburgh, and traveled more than 5,000 miles over eight months to reunite with his family in the Steel City. And now there is a possibility he will be released and returned home early next month.

Currently, his lawyer Sally Frick is negotiating a plea deal with the U.S. Attorney that would lower Esquivel-Hernandez’s felony re-entry charge to a lesser offense that could remove him from a list of priorities that keep him detained, according to Antonia Domingo, of the Pittsburgh chapter of the Labor Council for Latin American Advancement (LCLAA), who is advocating on behalf of Esquivel-Hernandez. A change of plea hearing is scheduled on Dec. 8.

However, even if his charge were to be downgraded, Esquivel-Hernandez would still need to have his U.S. Immigration and Customs Enforcement (ICE) detainer dropped, or he could be subject to an immigration court hearing and possibly still face deportation.

Esquivel-Hernandez’s supporters took to the streets on Nov. 15 to continue to tell his story and to demand that ICE Pennsylvania Field Officer Thomas Decker release Esquivel-Hernandez’s detainer. More than 100 protesters marched from Mellon Square in Downtown Pittsburgh to the federal office building on Liberty Avenue, where they occupied the street and chanted “Bring Martin home.”

LCLAA president Guillermo Perez spoke outside the federal building and pleaded to ICE to release Esquivel-Hernandez. “People like Martin make an important contribution to the community,” said Perez. “The undocumented are part of the American Dream. … Decker has the power to give prosecutorial discretion and return a good man to his family.”

The Pennsylvania ICE Field Office did not return request for comment by press time. 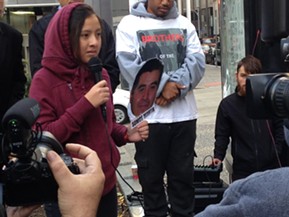 CP photo by Ryan Deto
Shayla Esquivel-Hernandez speaking at a rally in support of her father
Esquivel-Hernandez's oldest daughter Shayla, who is 10, also spoke at the rally about the negative effects her father’s long absence is having on the family. “It is affecting me and my whole family,” said Shayla. “It’s getting harder to lie and tell my little brother that his dad is still just at work.”

Joining the campaign was a group of labor advocates that swelled the numbers, normally in the 10-15 range at previous rallies, to more than 100 marching through the street. Groups supporting Esquivel-Hernandez now include the Thomas Merton Center, Fight for $15, Casa San Jose and Pennsylvania Interfaith Impact Network. Kai Pang, of labor-coalition Pittsburgh United, said that labor supports all workers, including the undocumented.

“It’s more urgent than ever for us to protect the immigrant community, since there is a lot of uncertainty moving forward,” said Pang before the rally. “I feel compelled to stand with the most vulnerable, and I know a lot of people in the labor movement feel the same way too.”

However, LCLAA's Perez is concerned about Esquivel-Hernandez and other undocumented immigrants moving forward because of the campaign promises of President-elect Donald Trump. "What we face before us is concerning to say the least," said Perez. "The president-elect waged a campaign based on racism and xenophobia."

Trump has since walked back promises of a deportation force to round up and deport all 11 million or so undocumented immigrants, but other immigration policies are uncertain. But Esquivel-Hernandez does have an ally in the federal government with U.S. Rep. Mike Doyle (D-Forest Hills).

Doyle sent a representative to the march to offer support for the Esquivel-Hernandez family. “Congressman Doyle wanted to express his support, and he appreciates the role Martin has played in the community,” said Bridget Barrett of Doyle’s office.

Perez capped the rally with a typical chant used when communities advocate for Latino undocumented immigrants who face deportation. “Aqui estamos, y no nos vamos,” said Perez. We are here, and we are not going anywhere.