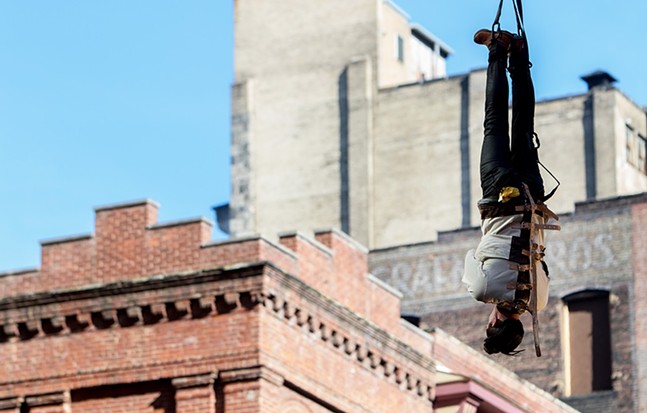 
Nationally touring comedian, magician and Baldwin Borough resident Lee Terbosic performed an upside-down straitjacket escape above a large crowd at the Houdini 100 event on Sunday. It was 100 years to the day when Harry Houdini escaped from a straitjacket at the same spot at Liberty Avenue and Wood Street Downtown.

“I haven’t done any other crazy stunts like this personally. I mean, I’ve jumped out of airplanes, but magic-wise, this is my real first big stunt,” Terbosic, a Pittsburgh native who was on America’s Got Talent last year, told City Paper in our event preview.

Check out our photos from the event, from the moment Terbosic was hoisted into the air to his grand finale where he waved — what else? — a Terrible Towel while still hanging upside-down above a cheering crowd.