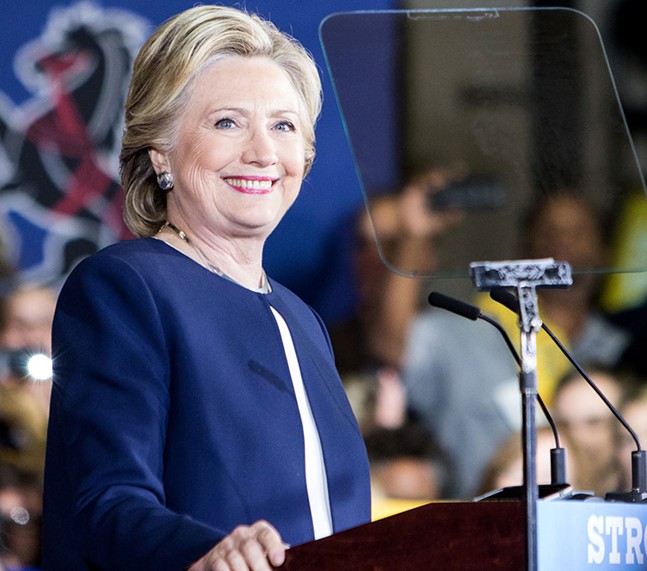 Surrounded by Steelers regalia in the Great Room at Heinz Field, Clinton made her final pitch in the western half of Pennsylvania, a swing state she needs to keep blue in order to beat Republican nominee Donald Trump. Clinton was surrounded by Democratic stalwarts like Leo Gerard of the Steelworkers Union, Sen. Bob Casey, Senate candidate Katie McGinty, Allegheny County Executive Rich Fitzgerald and Pittsburgh Mayor Bill Peduto.

Fitzgerald said Clinton would be a president who builds bridges not walls, and would move the middle class forward. “We have to make sure Pennsylvania remains blue,” he said.
Peduto invoked the city’s labor tradition. “No matter where you are there are people who sacrificed to help you,” he said. “The only way we lose is if we don’t turn out, if we don’t show up.”

Then Peduto quoted the words of another Clinton (George) as his parting words to the audience: “We’ve got to turn this mother out!”

Casey told the audience Trump’s tactics amounted to four words: “fear, smear, demonize and divide” without uttering Trump’s name. “We want a president who every day on the job will bring us together.”

McGinty challenged her opponent Sen. Pat Toomey to make clear whether or not he supports Trump. “Has he been standing up to Trump, manning up to Trump?” McGinty asked. “He says they have differences Well isn’t that dainty and delicate?”

The audience also heard from architect Andrew Tesoro,who says Trump failed to pay him in full for work he did designing one of Trump’s golf course clubhouses.

“At the end of the day I had some bills that had not been paid. I was introduced to the ultimate Trump organization machine that is engineered to not pay,” Tesoro said.

Mt. Lebanon native Mark Cuban introduced Clinton, but not before he criticized Trump for “stealing millions” through Trump University. “Unlike Donald Trump, I don’t need to rip people off. I have enough,” Cuban said.

Clinton praised McGinty as a “fighter.” “She will be the kind of independent voice Pennsylvania families deserve. And unlike her opponent she’s never been afraid to stand up to Donald Trump."

Clinton seemed at ease and upbeat as she delivered some familiar themes from a trimmed-down version of her stump speech: Trump built his buildings with Chinese steel, he doesn’t have the temperament to be president, and if she’s accused of playing the “woman card,” Clinton says, “deal me in.”

She referred back to her performances in the three presidential debates.

“I spent four and a half hours next to Donald Trump proving conclusively I have the stamina to be the next president,” she joked. Trump said so many odd things during the debates, Clinton added, “it was really hard not to go ‘what?!’”

Trump, Clinton said, went so far as to take out “a full page ad in 1987 to criticize Ronald Reagan. He is an equal opportunity insulter.”

Clinton stuck to her mantra of hard work being necessary to be president. “If you want to get things done that will help people you start by listening. I feel sorry for the press covering me; what are they going to say for the hundredth time ‘she was listening to people.’

With her father returning to his hometown of Scranton frequently when she was a child, Clinton says she’s seen the rebirth of Pittsburgh over time. “With my own eyes I have seen the changes in this great city.”

In her closing, Clinton pointed to Cuban’s business practices, of sharing profits with workers as preferable to Trump’s. “We have to make sure this economy works for everyone not just those at the top. When the middle class thrives, America thrives.

This is one of those make or break moments for the United States," Clinton said, urging the crowd to get out and vote. "It’s in your hands.”