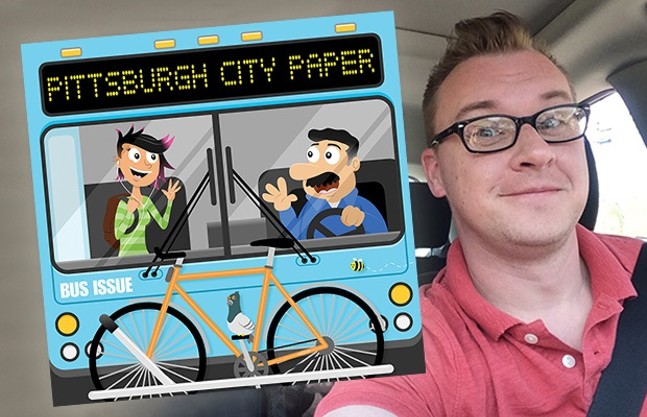 Artist Nathan Mazur with his Bus Issue cover illustration
It's hard to look through Nathan Mazur’s portfolio without smiling. This local artist’s website is full of lovable creatures he’s designed for CD covers, T-shirts and posters. He’s also skilled at giving life to inanimate objects, putting happy faces on objects like flowers and foods — you can check out a cartoon waffle dancing in an animated music video he collaborated on with Santa Barbara musician Parry Gripp here.

This is Nathan’s second City Paper cover. The first was an illustration of tots lugging oversized instruments for a story on young musicians being kept from playing bars. This week, it’s a cartoon of a Pittsburgh Port Authority bus, complete with Nathan’s signature cartoon bee on the front, for our Bus Issue. We checked in with Nathan over email after he competed this week’s illustration.


What neighborhood do you current live in?
I hail from the east suburbs to ensure that Pittsburgh’s garbage traffic keeps me at least an hour from anything I need or want to do.

Are you freelancing full time, or do you have a separate day job as well?
I am far too anxious of a person for the feast and famine that accompanies full-time freelance, so I push pixels around at a think tank throughout the day.

What’s your favorite thing about being an artist in Pittsburgh?
There are lots of places in Pittsburgh to get your stuff displayed or peddle your wares, and the arts community in general is fairly accessible, helpful and friendly.

What’s your work space look like?
My work space is a messy, finished room in the basement with a couple desks: one for the computer and the other for painting. I share the room with a pair of Australian lizards and a 12-year-old Mexican Red-Knee tarantula. The python was moved to the laundry room because of his size. There’s some taxidermy specimens and various musical instruments in there as well. I’ve been working at the dining room table a lot lately, though.

Your online bio claims that you’re a “cereal enthusiast.” That warrants an explanation!
I’ve tried just about every commercially available cereal at some point. The sugary stuff is my vice. My favorites are Reese’s Puffs and Basic 4.

Tony the Tiger, Count Chocula ... There are so many great cartoon characters on cereal boxes. As a “cereal enthusiast,” what’s the best one?
I’m really liking the newly redesigned Lucky from Lucky Charms, though those weird, little cannibal squares they often use for Cinnamon Toast Crunch are endearing.

You’ve done work for books, record albums and television. What was your favorite assignment ever?
I don’t have a favorite assignment, really. I love the stuff I do for Parry Gripp because it’s always super fun. I also really like seeing my art get made into a tangible good, like a book, sticker, T-shirt or stuffed animal.

What’s the worst possible thing you can think of that someone could ask you to draw?
I dislike drawing classrooms with a lot of people in them or crowded bus interiors. It only reveals how shoddy my perspective skills are!

Your portfolio is full of adorable creatures and feels so happy. Have you intentionally avoided drawing anything too dark?
I haven’t purposely avoided anything dark, it’s just never really been asked of me. A lot of the garish colors and forced expressions I choose for my characters often have a manic undercurrent. Beneath the aposematic colors lurks implied danger, I suppose.

Where does the name of your website “Scared of Bees” come from?
Scared of Bees was a name for a band that never became fully realized. I had the web domain already purchased and needed a portfolio site, and since my actual name was already taken, I just used that. It’s worked out well as it’s kinda funny, more memorable than my given name, and is a good conversation starter. I’m not really scared of bees, though. We need more bees!

Your cover illustration for us this week is for our Bus Issue. Do you have any good stories about riding buses in Pittsburgh?
I was once taking a bus from Downtown to the South Side. It was late afternoon. Around 18th Street, some grizzled old dude walked on with a case of American. A couple minutes later, I heard him crack one open and enjoy a cold, frosty chug. And why wouldn’t he?

Do you have any upcoming projects we should be on the lookout for?
I’ve got a couple animated videos in the coming weeks I worked on for Parry Gripp. I’ve also recently undertaken something I’ve dubbed the #jartproject on Instagram where I draw something inside of a mason-jar stamp I bought at Michaels. I’m not happy with most of them, but it’s been a good exercise to create things without the benefit of ctrl+Z.