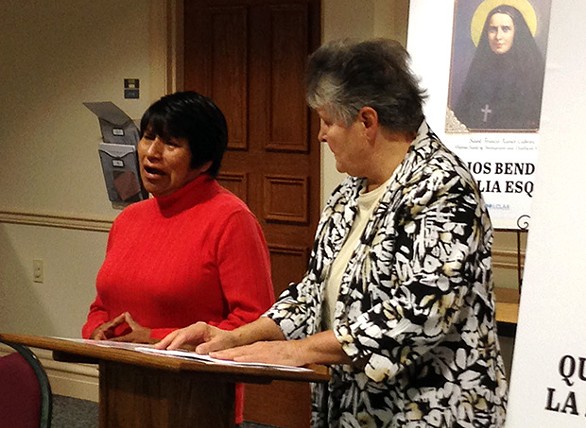 CP Photo by Ryan Deto
Maria Elena Hernandez-Lopez, the mother of Martin Esquivel-Hernandez, sheds tears and begs that her son be released from immigration detainment on Nov.1.
It has been six months since Martin Esquivel-Hernandez last set foot in his Pittsburgh home. Esquivel-Hernandez, an undocumented immigrant from Mexico with no criminal record, was detained by U.S. immigration officials in May and has spent most of his incarceration locked up in a private prison in Youngstown, Ohio. He faces felony re-entry charges and most likely deportation if convicted. City Paper has covered Esquivel-Hernandez’s story extensively, showcasing his life as an advocate for Latinos in Pittsburgh and the struggles he went through to reunite with his family in the U.S.

Two weeks ago, Esquivel-Hernandez, requested that his felony re-entry charges be dropped, according to a motion filed by his lawyer, Sally Frick. The motion claimed that Esquivel-Hernandez was racially profiled when, in April, he was pulled over by Mount Lebanon police (the event that led to his detention by U.S. immigration officials and felony charges by the Western Pennsylvania U.S. District Court).

Esquivel-Hernandez was cited by Mount Lebanon Police for driving without a valid license, insurance and registration, but the motion claims “there has been no indication of any valid reason for the traffic stop.”

In response, Assistant U.S. Attorney Paul Hull, who is prosecuting the case on behalf of the federal government, requested that Esquivel-Hernandez's motion be denied, and rejected any claim of racial profiling. “The government contends that defendant’s allegations are just wrong,” wrote Hull in the response.

But, Esquivel-Hernandez’s advocates are not giving up hope. On Nov. 1, a group of more than a dozen supporters signed letters urging U.S. Attorney David Hickton to drop Esquivel-Hernandez’s case. The group, which included faith-based leaders and immigrant activists, also held a prayer circle outside the U.S. Courthouse on Grant Street, Downtown.

“Many undocumented immigrants are terrorized into silence, but Martin refused to be silent,” said Janice Vanderneck, of Latino resource center Casa San Jose, in reference to Esquivel-Hernandez's work advocating for local Latinos. “We call on [Hickton] to show compassion.”

Esquivel-Hernandez’s wife, Alma Brigido, pleaded to Hickton to drop the charges and allow Esquivel-Hernandez to return home in time for the holidays. “We don’t want to be separated for Christmas or New Year’s,” said Brigido in Spanish. “Please don’t destroy the unity of one more family.”

Brigido also begged that her husband’s case be dropped so Esquivel-Hernandez could return home and take care of his children, Samantha, Luz and Alex, who is an American citizen. “If you don’t want to support Martin in this way, please do it for his children,” said Brigido in Spanish.

Esquivel-Hernandez’s story is not uncommon. As previously reported in CP, there have been 16 other felony re-entry charges filed in the Western Pennsylvania district since June 2015. Only one of those cases involved an undocumented immigrant with a serious criminal record. According to Syracuse University, the majority of undocumented immigrants detained by immigration officials have no criminal record.

Maria Elena Hernandez-Lopez, Esquivel-Hernandez’s mother, spoke through tears has she pleaded that her son be released and allowed to return home. “I ask you, attorney Hickton, that you recognize his pain,” she said in Spanish. “I am sure your mother would suffer the same as me.”

A trial date has not been set for Esquivel-Hernandez. 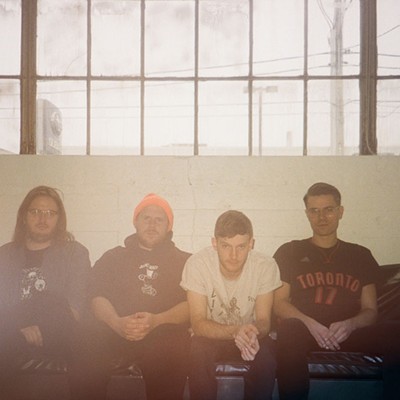 Stefan Babcock of PUP on chameleons, soup dumplings and never taking a break, ever