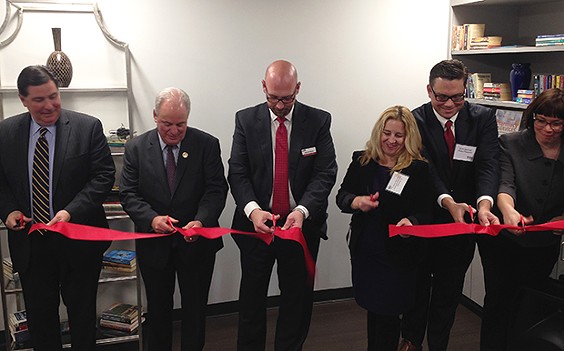 CP photo by Ryan Deto
Pittsburgh Mayor Bill Peduto (left), U.S. Congressman Mike Doyle (center left), and PATF CEO Sean DeYoung (center) cut the ribbon on new PATF facility.
For the past few years, the rate of HIV infections in Allegheny County has remained steady. But rates in surrounding counties, like Beaver and Washington, have dramatically increased, primarily driven by the opioid epidemic, according to the Rollins School of Public Health at Emory University, in Atlanta. And for those living with HIV, health-care advocates say the Pittsburgh region still suffers from poor access, thanks to stigmas among doctors and patients.

HIV-related health care in Southwestern Pennsylvania is due for an overhaul, and the Pittsburgh AIDS Task Force is responding. On Oct. 25, the longtime HIV-service organization completed a $1 million renovation that not only expanded current services at its East Liberty headquarters, like a food pantry and pharmacy, but also created a new sexually transmitted infections testing center and a fully functional medical clinic.

Pittsburgh Mayor Bill Peduto was on hand to cut the ribbon at PATF’s new facility yesterday and lauded it, saying it could help address the problem of stigmas associated with people living with HIV.

“They are not just treating the disease, they are treating the stigma,” said Peduto. “People were afraid to get help, but [PATF] is having a dialogue we need to have, that we were not ready to have.”

The clinic, which is led by Dr. Sarah McBeth, will specialize in HIV care, but also provide routine medical care for clients and their families, and sexual-health care for community members, even if they don’t have HIV. Sean DeYoung, PATF CEO, said the task force already serves the entire 11-county Southwestern Pennsylvania region through outreach and testing, but he hopes the expansion will bring in people from all over to get the health care they need.

“A lot of people come into PATF from rural counties,” said DeYoung. “My hope is that they are more likely to get engaged in the care they need when they visit.”

Pennsylvania’s opioid epidemic has led to stark increases in HIV outbreaks and hepatitis C in places where those infections used to barely exist, like Somerset County. DeYoung said he hopes to get a mobile testing unit operational soon, to test the rural population. He also noted the space dedicated at the new PATF facility for a behavioral-health office, which will offer mental-health and substance-abuse counseling. PATF expects that service to be operational in late 2017.

U.S. Congressman Mike Doyle (D-Forest Hills) also attended the ribbon-cutting. He applauded the new facility, saying it will usher in the modern care that the community needs.

“This speaks volumes [about] the work the the Pittsburgh AIDS Task Force does for the community,” said Doyle. “To see a one-stop shop where people can get care, it shows how [health care] is adapting.”