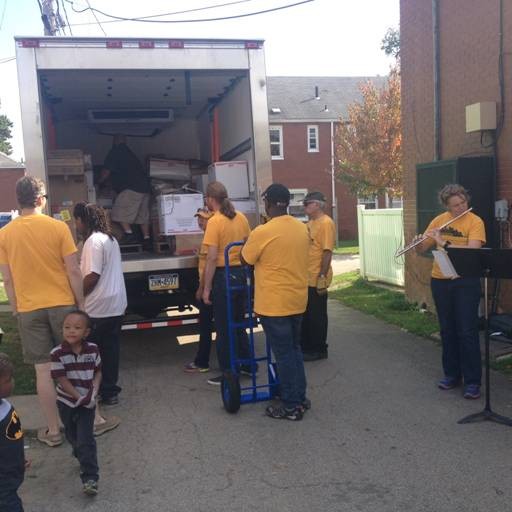 CP photo by Stephen Caruso
Striking PSO musicians unload a truck of food from 412 Food Rescue at Hawkins Village as two fellow members play soothing chamber music for residents.
Striking Pittsburgh Symphony Orchestra musicians might have been unloading trucks Thursday, but it wasn’t because they're giving up on music.

The performers, on strike since Sept. 30 after contract negotiations broke down with the PSO, were instead teaming up with 412 Food Rescue, a Pittsburgh charity dedicated to fighting hunger by saving food waste. With the aim of “feeding the body and soul” of their neighbors, the yellow-shirted musicians unloaded trucks of food at four separate stops around the city to Mozart melodies and Telemann tunes.

Jennifer England, 412 Food Rescue’s director of operations, described it as a “neat partnership” that fits into their model of working with businesses to take their food waste — and recruit volunteers. She also noted that PSO workers had a “very unique skill to bring” besides carrying crates: their music.

Normally, 412 Food Rescue is looking for donors — of which they have more than 100 — to give away excess food that, while still perfectly edible, is past its sell-by date. (England says the date “indicates nothing.") But the group also takes food that may just appear unpalatable, or that doesn’t match a seller's aesthetic expectations.

“[The food might be] fresh peppers that are too big, or too small, or ugly,” England said. “If there’s too many in the case, then the whole case has to go.”

At the event yesterday, PSO musicians helped distribute food at four locations. Lorien Hart, a violinist, found out about 412 Food Rescue over the summer and convinced five co-workers to volunteer with her. After participating, the maestros brainstormed a way to contribute in a distinct fashion.

“[We said that 412 Food Rescue] is awesome and is great, but we need to be bringing music to these communities,” Hart said.

The day started outside Braddock’s Free Store, as curious residents perusing the shop’s wares listened to Hart and Rhian Kenny, a flutist, play a four-song performance. The airy melodies floated around the shop, only stopping between songs — or because the breezy October day disturbed the musicians’ sheet music.

Wilkinsburg resident Donella Smith enjoyed the music. She works in Braddock with Early Head Start, a home-visiting program for pregnant women that works with low-income families. She says she uses music in her job to interact with kids, because of how well people, young and old, respond to a melody.

“Music has always been part of life, period. It gets you moving and dancing and changes your mood as well," Smith said. “That’s something I love to expose [my nieces and nephews] more too, the arts,”

Like the store, every performance of the day was free of charge.

One of their other stops was Hawkins Village. There, the musicians — with some help from a few residents, such as Treyvon and Jamiere Roberts, ages 4 and 3 respectively — unloaded provisions such as six pounds of carrots and four pounds of pork and beans, as Hart and Kenny worked through a set . Elizabeth Roberts, the two children’s great-grandmother, was happy the kids were exposed to something new.

“It’s more important for [the musicians] to bring kids out,” Roberts said.

England, a former flutist herself, plans to keep the partnership going even after the strike is over. A monthly commitment from PSO would give listeners a way to find peace in their day, according to Hart

“[Music] brings [people] a moment of getting away from ... their reality,” Hart said. “It brings us all to this sacred space, where we can just sit and enjoy something beautiful.”

The escape from reality goes for the musicians, too, said Hart. Despite the PSO’s cancellation of all concerts until Nov. 18 due to the strike, she was determined to keep performing.

“[Playing music is] a distraction for us, but we just want to go out and play,” Hart said. “If there is no music going on in Heinz Hall, we’re going to bring it out in the community,”

Music To Sweep To 06: Thumpers