In May, CP editor Charlie Deitch asked the staff to submit suggestions for new categories for our Best Of Pittsburgh issue. When the new categories were announced, I was surprised to see that only my “Best animal at the zoo” submission was accepted (my vote: the ants!). While I’ll concede that some were a little obscure (“Best plumber to become the next Mac Miller”) or potentially divisive (“Best new god [monotheistic]”), I think Charlie really dropped the ball on these gems.

As CP’s most recent editorial hire, I had to swallow my pride and accept that the world simply wasn’t ready to rank the neighborhoods based on smell, or crown the “Cutest Squirrel in Squirrel Hill.” While our 2016 winners are in the bag (read here), there’s always hope for next year. So here are some of my rejected suggestions, worded as they were in the email, with some additional fawning commentary.

If you like, love or hate these, or have ideas for some of your own, please email me at alexgordon@pghcitypaper.com to commiserate. Enjoy.

1. Best local commercial
When I moved here in 2005, I remember thinking that Pittsburgh had the greatest local commercials in the country. There was that “Pepper!” guy, the dudes who stand on their windows, Steidl and Steinberg, Sir Edgar Snyder, and that wacky millennial lawyer Dan (lots of lawyers, they may need their own category). These people deserve recognition.


2. Best show flier
There is nothing funny about this. We have great show posters in this city and the sketch-jockeys doing the work really deserve a day in the sun.

3. Best river swimming
They say you really shouldn’t swim in the rivers, but I say we put it to a vote.

4. Best creepy building
We are stacked in this department. Have you seen those new condos in Lawrenceville? Spooky!

5. Best online-related graffiti: "Facebook Is Boring" vs. "War on Google"
Not sure how popular this trend is at this point, but I was thinking maybe we could add “Squarespace Sucks” or “Words With Friends: Bad” or “Fuck You, Venmo” into the mix.

6. Best shortcut, vehicular/bikular/pedestriatic
I’ve discovered some doozies around town. Pro tip: The more yinzery the Lyft/Uber driver, the cooler the shortcut. Did you know there’s a West Carson street? Fantastic.

7. Best parking lot to commit misdemeanors
Let’s say you’re fixing to do some loitering or bigamy but can’t find a good venue, this category would be just for you. For my money, nothing beats the Mount Washington CoGo’s parking lot for impersonating public servants.

8. Best bathroom graffiti
Once, when I was a kid, I read this on the inside wall of an outhouse in Upstate New York: Here I sit / broken hearted / I tried to poop / and only farted. That day changed my life. I think we shouldn’t underestimate the power of a good stall-wall sketch or proverb. 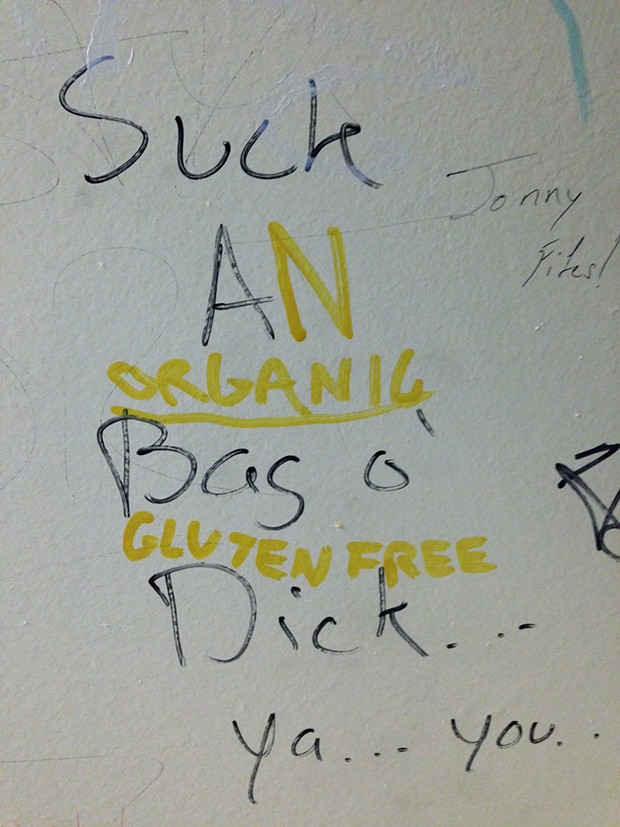 Photograph by Alex Gordon
Bathroom graffiti at Gus's in Lawrenceville.
9. Best place to sit down in public
There are so many candidates: benches, etc ...

10. Best public fountains to steal pennies from
We’ve all been there: The rent’s due and you’re several thousand cents short, so what do you do? Where do you go? Do you need a net? The people need to know.

11. Best place to cry in public
This one could go two ways: either a good place to cry discreetly if you’re caught up in emotion while out and about; or a good place to get some attention for your sadness. Personally, I think a good cry deserves a good audience, and everybody I know agrees. My vote: the top of one of those double-decker tour buses, into the microphone.

12. Best sidewalk to ruin peoples’ brunches with your crude behavior
Sticking it to yuppies is a Pittsburgh tradition as old as sand. With new restaurants being built every day, it’s impossible to keep up with all the best spots to flip the bird at people eating frittatas. Freaking out squares shouldn’t require a master’s degree. Let’s make it easy, and by this time next year, you’ll be hocking loogs and blowing vape smoke all over the hottest bruncherias in the city.

14. Best sidewalk chalk sign
From “Today’s Specials” to “We’re Open,” Pittsburgh is the chalk-sign capital of Pa.! Let’s show off a little.

15. Best unrealized blueprint for Pittsburgh public transportation
This one is very specific. I think there is only one.

16. Best day of the past year/Best weekend/whatever of past year
Seriously, this is a good one. We should do this.

17. Best bus driver
I love a good bus driver and I can’t imagine I’m alone on that. While I don’t like the idea of excluding those who don’t make the cut, the A-listers deserve some kudos.

18. Best crossing guard
I can see why this was cut.

19. Best unbroken stretch of bikability (bikable terrain)
They say any stretch is bikable if you bike on it, but as a safety nut, I prefer to do it away from cars and people and hills and grass and dirt and stones. (“Unsafe at any speed,” Ralph Nader wrote.) That’s why I’d like to find some spots where I can bicycle smoothly and safely, like an abandoned mall or a bike lane.

20. Best Wendy’s
Liberty Avenue, in Dormont. It’s got a fireplace.

21. Best new resident
That kid who got stuck between buildings in Oakland, was he new here? Either way, he deserves some sort of recognition.

22. Best place to hear a great echo
Another gem.

23. Best commemorative plaque
Idea: the winning plaque could be adorned with another, smaller plaque commemorating its Best Of win. If there’s a three-peat, we upgrade the plaque to a billboard.