On Saturday, the Carnegie Science Center opens a new IMAX film, Extreme Weather. But while the large-format documentary explores the growing impact of climate change on the planet, viewers might notice a curious omission: The 40-minute film says nothing about why the climate is changing, let alone what we might do to slow the process. 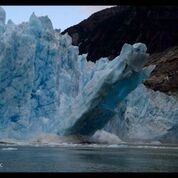 An Alaskan glacier crumbles in "Extreme Weather"
The silence about the man-made greenhouse gasses that are driving climate change wasn’t odd to me just because the Extreme Weather preview screening was held last Thursday, as Hurricane Matthew — itself a bit of extreme weather whose power some experts have linked to climate change — was raging up the Florida coast.

Indeed, the film’s own spectacular opening image, of a mountainous glacier disintegrating into the waters of a southern Alaskan fjord, might have kicked off any number of climate-change docs. The second and third sentences of Michael C. Hall’s narration tell how weather is “growing more extreme” and how “[a]verage global temperatures have risen one-and-a-half degrees Fahrenheit in the last 150 years. A seemingly small change, but a devastating impact.”

You imagine the payoff will come in some message about the need to burn less carbon. But you wait, and you wait, and in 40 minutes it never arrives. In fact, the film explicitly attributes “our ever-changing weather” only to “our planet’s natural forces” and implies that the glacier researchers in Alaska, tornado chasers on the Great Plains, and firefighters battling forest fires in drought-stricken California whom the film crews followed are figuring stuff out.

“The more we learn about how earth’s natural forces are connected, the better we can respond to our planet’s extreme weather,” concludes Hall. 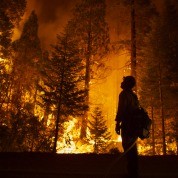 A forest fire rages in "Extreme Weather"
This in a film presented by National Geographic? A film that’s booked to screen in some 45 IMAX theaters over the next several months, surely informing many people’s attitudes toward climate change?

To say the least, I was nonplussed. The Science Center kindly connected me to film’s director, Sean Casey.

Casey, a professional stormchaser whose previous IMAX films have included Tornado Alley, says he was inspired to pitch Extreme Weather to Nat Geo largely on the basis of the spectacular footage it would generate. However, as it turns out, he does acknowledge the scientific consensus that climate change is real, already happening, and caused mostly by people.

But he felt that a film about that topic had already been made — a decade ago, by Al Gore.

It’s unclear, however, how much of a turnoff a climate-saving message would be. An Inconvenient Truth (2006), after all, grossed more than $23 million at the U.S. box office — not bad for a documentary of a lecture. And in 2007, Disney — Disney! — did pretty well with a nature film titled Arctic Tale, which followed some walruses and polar bears around, continuously warned of the effects of climate change, and concluded with a bunch of kids making suggestions for conserving energy (like turning out the lights and driving hybrid cars).

The fact that such small-scale, voluntary individual actions are unlikely to alter the course of climate change isn’t the point; the point is that at least Disney — a global symbol of universally accessible entertainment — acknowledged a decade ago that climate change is caused by people. (By the way, Arctic Tale too was co-produced with National Geographic; Extreme Weather’s co-presenter is Lockheed Martin — which apparently, at least as defense contractors go, is pretty good on acknowledging climate change.)

Climate change’s roots in human behavior were even emphasized in the displays and interactive games by several exhibitors at no less populist an event than ALCOSAN’s recent annual free open-house, which drew some 2,300 visitors to the water-treatment plant on Sept. 17.

Filmmaker Casey seems like a conscientious enough fellow; he even spent part of our conversation lamenting the fate of California’s pine trees, which along with drought and fire are beset by beetle infestations facilitated by the warming climate. I asked him whether in Extreme Weather he couldn’t have spent at least a few minutes, even at the very end, noting that driving cars, raising cows and cranking the AC are making climate change worse. The problem, after all, isn’t “our planet’s natural forces”; it’s us.

Including such a message “was floated around,” said Casey. “But then we felt it was too preachy. And we felt like that would turn people off in a way from the film. … I mean, it’s there. We were saying that our earth, our atmosphere is warming. Our oceans are warming. They are rising. We are saying that ice is melting quicker now, so oceans are rising because of it. Storm surges … we touched upon that. But to point it directly at showing a coal-burning plant … I don’t know.” He paused. “I just wanted to stick to the excitement and the power of the format.”

In response to a different question, Casey said that that he believes delivering a message about the human causes of climate change is actually not even necessary.

Linda Ortenzo, the Science Center's director of STEM programming, seconds this line of thinking. "I think that anybody who watches news media ... sees and hears that [message] quite frequently." Ortenzo adds that earlier IMAX films have also discussed climate change. (She named Coral Reef, which talks about how warming oceans damage reefs, and Flight of the Butterflies, which explores how climate change affects migration patterns.)

But the human causes of climate change are hardly universally acknowledged, especially in the U.S.
For one, climate coverage in the mainstream media is both scanty and, according to reports like this one, actually shrinking. Moreover, one of the most-watched cable networks, Fox News, tends to offer the most misleading climate information.

So while surveys like this one indicate that a majority of Americans now accept that global climate change is real, what percentage of them believe human activity is to blame is unclear. And one of our two major political parties is dead set on preventing broad action to fight climate change — and even on rolling it back.

Another 2015 survey indicated that fewer than 40 percent of Americans believe that climate change is “a very serious problem,” compared to the global average of 54 percent.

I asked Casey about divided opinion on climate change. “People are coming from different backgrounds and maybe have different agendas,” he acknowledged. He added, “And it’s hard to really have a grasp of what is going on because the system, our earth, is so large and can absorb so much. And it’s that slow burn, it’s that slow burn of change that is hard to see. … So maybe people just don’t see it. And I think that’s what we were doing in the film, kinda really showing it.

So he hopes the film will inspire people to take action?

“Of course, of course," he said. "When people see the film, after seeing the film, people hear about retreating ice, they have a strong mental imagery now of what that looks like. When you have a glacier calv[ing] right at you … when they hear of wildfires because of drought in the western United States, I think these are all things that maybe now they have a strong visual reference, so maybe when they hear of these things, there’s a connection.”

Ortenzo agreed. Although Extreme Weather does not note the human causes of climate change, Ortenzo says that the film "leaves an opportunity for people — very powerfully, I think — to put together conclusions about what is happening and why."

It should be noted that Extreme Weather does a fair job of showing how one aspect of climate change can affect many others: Rising temperatures, for instance, alter wind speeds and directions, changing where rain falls; warmer ocean water means stronger tropical storms; ash from forest fires can drift onto snowpacks, speeding up melt; and melting glaciers add to sea-level rise that threatens the millions of earth’s citizens who live on coasts.

And a failure to forefront what’s making climate change happen is hardly limited to a single IMAX film. It’s a problem everywhere: Most newscasters, even meteorologists, can talk for days about the latest hurricane or wildfire without ever mentioning these phenomena’s roots in climate change.

Even among local museums and other exhibitors that highlight the natural world, discussion of climate change is scarce. You can easily walk through these facilities without seeing any real mention of it.

There are exceptions. In its South Conservatory, for instance, Phipps Conservatory features signage that promotes actions people can take to reduce their personal greenhouse-gas emissions. But attention to climate change in these venues is generally limited to online materials and educational programs, rather than the permanent exhibits that are all that most visitors see. An example is the Pittsburgh Zoo & PPG Aquarium’s One Degree of Change.

Aside from its IMAX films, the Science Center itself offers some educational programming that touches on climate, says STEM programming director Ortenzo. Offerings include the live presentation The Energy Show, which Ortenzo says explores energy use in general and notes the "effects of fossil-fuel consumption on the environment." (The show is geared for fourth- through eighth-graders; its online description says that visitors "learn how energy is harnessed to power our civilization. Explore renewable and non-renewable alternatives, while learning about technologies and careers needed to sustain energy consumption. During the show, learn how to identify energy forms and examples of energy.")

No permanent exhibits at the Center address climate change, she said. (It should be noted that the Center's Chevron STEM Center is sponsored by a fossil-fuel company.)

In some respects, many local institutions are a bit like Extreme Weather, in that the film's acknowledgement of humans’ defining role in “our ever-changing weather” can be found only in its press materials, something few viewers of the film will have access to.

Perhaps the most high-profile signage at a local institution is at the zoo’s Water’s Edge exhibit, featuring polar bears. When it opened, in 2006, Water's Edge included a poster enumerating the effects of greenhouse gasses, and suggesting alternatives to fossil fuels. A zoo spokesperson said that signage was recently removed but would be back in place after updating.

Hip-hop artist/activist Blak Rapp Madusa hosts a pre-screening of her new film, Her Time to Shyne