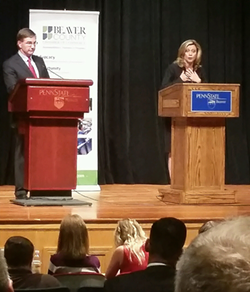 Photo by Charlie Deitch
Erin McClelland and Keith Rothfus during a debate at Penn State Beaver Oct. 6.
Gober was at the forum as a surrogate for Rothfus when he made the comments at the end of an answer to a question on reproductive rights.

"The idea that we will take federal money to murder innocent children is absolutely absurd, wrong and borderline Hitleresque. Period," Gober said. (Jump to the comments in the video here.)

That led McCelland to respond: "Well, I’ve been called a lot of things but Hitler, that’s a new one."

Gober responded: "I wasn’t calling you a Hitler."

But McCelland clearly felt the comment was aimed at anyone who supports a woman's right to choose. Two days later, she brought the comment up on stage during a debate with Rothfus at Penn State Beaver in Monaca.

"Mr Rothfus, on Tuesday night at a panel I was on, you had a representative there, and we were all asked about an issue regarding a woman's reproductive rights, and your representative referred to women on my side of the issue as Hitleresque. That was the word," McClelland said, to which an audience member replied, "They are."

Pittsburgh City Paper reached out to Gober and to Rothfus' campaign for comment this morning and have yet to receive a response. We will update this post if we hear back.

When asked for comment this morning, McClelland wrote in an email to CP: "While it is appalling that Keith Rothfus's campaign would invoke Adolf Hitler when it comes to the issue of providing women's health care such as breast and cervical cancer screenings and contraception, it is unfortunately no surprise. Mr. Rothfus voted against the Violence Against Women Act and as recently as last week, voted against Zika research funding to protect unborn babies from horrible birth defects caused when their pregnant mothers contract the virus. Keith Rothfus should be ashamed of his campaign for opposing these vital services, and he should refrain from using vitriolic rhetoric in attempts to justify his indefensible position."

In the video, Gober talks about the more than $500 million in federal funding that Planned Parenthood receives annually. When asked if Rothfus supported funding the organization, Gober replied, "No, not at all, not one penny. Period." Gober said claims that denying funding for Planned Parenthood means denying funding for women's reproductive health care is a "feminist argument" and he doesn't think it holds up.

"I'll point them to the hundreds and hundreds of clinics throughout the Commonwealth that provide services without abortion," Gober said. "That's not what this fight's about. This fight is about abortion."

Regardless of what the fight is about, it's hard not to think about Godwin's Law that says comparing anything to Hitler usually means you're losing the argument.