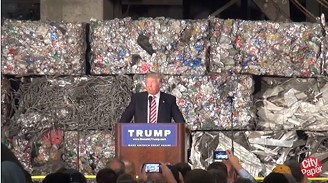 CP photo by Ashley Murray
Donald Trump speaking at a aluminium processing plant in Monessen, Pa.
In April, when Republican presidential nominee Donald Trump first campaigned in Pittsburgh, he promised thousands of attendees at a Downtown rally that he would bring back the steel industry. This was his first "Make America Steel Again" mention, and Trump continued to make this claim at events across the country in the following months.

Now, a new article shows that while Trump claims to be a supporter of the U.S. steel industry, he actually avoided using American-made steel for two of his last three construction projects. Instead, he opted to use Chinese-manufactured steel, according to Newsweek. Trump International Hotel Las Vegas was completed in 2008 and used Chinese steel, as did Trump International Hotel and Tower in Chicago, which opened in 2009.  (Trump has been very critical of China and trade policies in speeches.)

And Rick Bloomingdale, president of Pennsylvania American Federation of Labor and Congress of Industrial Organizations (AFL-CIO), said this is further prof that Trump is a "fraud."

“Donald Trump claims to care about improving the economy for American workers, but his track record proves he’s a hypocrite," said Bloomingdale in a press release. "His use of Chinese steel falls in line with his history of producing Trump products overseas, showing little concern for working families who depend on good manufacturing jobs."

"Trump has a proven history of choosing to fill his own pockets rather than those of American workers," said Snyder in a press release. "Working people can’t risk a Trump presidency, which would be driven by corporate greed."

We can't say we are that surprised about this latest Trump revelation, since he has a knack for making empty promises on Pennsylvania industry. Last month, City Paper pointed out Trump's claims to unleash the fracking industry were mostly bogus, since the industry has been mostly free of strict regulations for years.

Just 35 more days till the election.

Despite strike, Pittsburgh Symphony Orchestra musicians still on for tomorrow’s Day of Music