Despite strike, Pittsburgh Symphony Orchestra musicians still on for tomorrow’s Day of Music

The musicians of the Pittsburgh Symphony Orchestra are on strike, and the symphony has canceled all its performances through Oct. 27. But the musicians' own planned series of informal Day of Music concerts will go on as scheduled tomorrow. 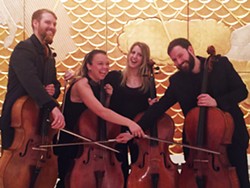 Left to right: PSO cellists Charlie Powers, Bronwyn Banert, Allie Thompson and Michael DeBruyn, will perform tomorrow at noon at Fifth Avenue Place, Downtown
As announced Sept. 20 (10 days before the strike began), the musicians will offer 11 short performances throughout the day and across the city, 10 of which are open to the public. “The goal is to spread out and fill Pittsburgh with music,” says event organizer and flutist Jennifer Steele.

Group sizes range from a simple duo to a complete brass band.

The first performances, at 10 a.m., will involve two string quartets, one at The Children’s Home of Pittsburgh, in Friendship, and one at the Hillman Cancer Center, in Shadyside.

At noon there will be concerts at Fifth Avenue Place and the Allegheny Courthouse, both Downtown. The only show not open to the public, a flute/harp duo's concert, is scheduled for the Children’s Hospital of Pittsburgh in Lawrenceville, at 1 p.m.

There are four performances at 2 p.m.: at Canterbury Place, in Lawrenceville; Little Sisters of the Poor, in Brighton Heights; baggage claim of the Pittsburgh International Airport; and the atrium of Magee-Women’s Hospital, in Oakland.

At 4:30 p.m., a string octet will perform at Light of Life Ministries, in North Side. The last performance of the day is a traditional brass funk band that will play on the veranda of the Hill House located in the Hill District. 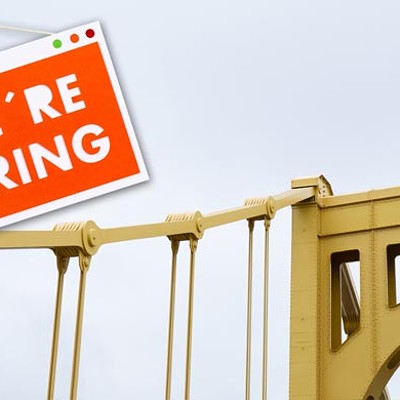