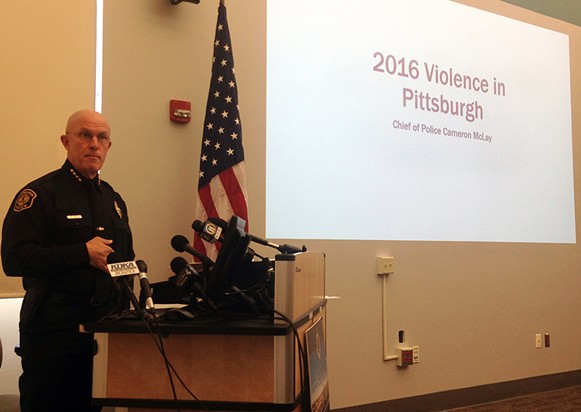 CP photo by Ryan Deto
Pittsburgh Police Chief Cameron McLay
Compared to last year, non-fatal shooting crimes were down in Pittsburgh, according to statistics released by the FBI this week. From January 2016 to August 2016, there were 25 less non-fatal shootings and about 70 less aggravated assaults with a firearm compared to the same time frame in 2015. (However, there were 44 homicides this year, up 10 from the same period in 2015.)

In a press conference on Sept. 30, Pittsburgh Police Chief Cameron McLay detailed how community-policing strategies, such as outreach, were effective in lowering these numbers. He said these strategies were  particularly effective in the North Side, given that many neighborhoods there saw significant reductions in violent crime.

“We were very targeted at those who were actually causing the violence,” said McLay. “Since most of the offenders there did not actually live there.” McLay said he wanted his officers to only target those committing the crimes. “I wanted to convey [to residents] that ‘We care about you, we love you, we don’t want you to fall victim to violence.’ That is why outreach is important.”

McLay also explained how in the East End, his officers have worked with the Pittsburgh chapter of Men Against Destruction-Defending Against Drugs and Social-Disorder (MAD DADS) over the last year. He said the work has reduced violent activity in East Liberty and Homewood. “We have seen a dramatic decrease in [complaints] in the East Liberty business district,” said McLay. “In the Homewood business district, businesses have reported less loitering and people are feeling safer.”

McLay said the working relationship with the volunteers at MAD DADS helps to increase communication with the community because “some people are not comfortable talking to the police.”

But McLay says there are still many problems to address. Violence rates are still disproportionately higher among blacks, particularly young black men. And McLay says his department will be paying special attention to Downtown, particularly the area around the Wood Street T Station, which has seen a flurry of criminal activity.

Over, McLay said he will continue to institute community-policing strategies and rejects the notion the department needs to be “tough on crime.” He points to the work with MAD DADS in the East End as proof, as crime rates have dropped there.

‘Community policing is crime prevention,” said McLay. “It reduces crime. It is not just a feel-good strategy.”