Donald Trump in Pittsburgh: Drilling into the candidate's nonsense on natural gas | Blogh

Donald Trump in Pittsburgh: Drilling into the candidate's nonsense on natural gas 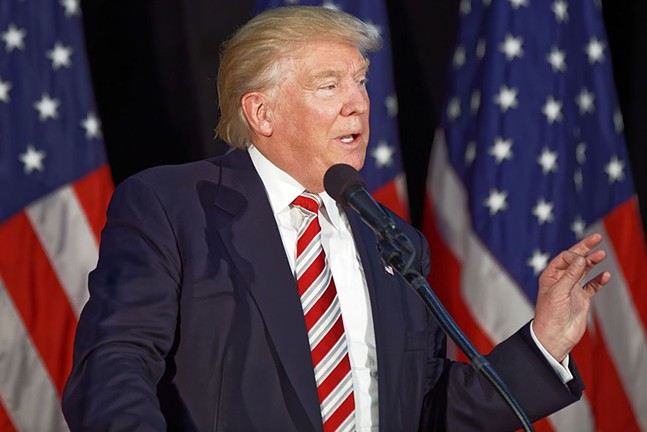 Photo by Michael Vadon
Donald Trump during a Sept. 13 campaign stop in Aston, Pa.
Donald Trump came to Pittsburgh Thu., Sept. 22, to talk energy policy at the Marcellus Shale Coalition’s Shale Insight Conference and Pittsburgh City Paper brought you a live blog from every moment of the protests outside.

Later that day, we noticed that an anonymous commenter on the blog left this note to us:

“This is ridiculous. The man gave a speech that was more important than the insignificant protesters. You're story should be focused on the fine policies he presented today!”

While we did watch the live stream, you are right, “unnamed angry person.” So our staff decided to take a look at Trump's "fine" speech, particularly the portions about natural gas. To be honest, we're not so fine with it.

According to press reports, his talk was a lot of noise made to reassure the industry that he’s on its side. But even leaving aside the fact that a continued reliance on natural gas would be a climate disaster, his promised fixes were as ridiculous as his premise.

First, Trump promised to boost production of both coal and natural gas. That’s effectively impossible, given that the rise in gas production in the fracking era is the main cause of the decline in coal production.

Trump’s vow to deregulate gas production suggests that the industry is currently hamstrung — unable to produce. Yet the reason gas prices continue hovering near an historic low is that it’s so easy to drill that there’s a gas glut. It’s hard to see how stripping rules protecting the environment, and the communities in which drilling operations and pipelines operate, would help when from the industry’s perspective there is too much gas already (and when, in fact, the country is now the world’s largest producer of oil and natural gas). Moreover, most gas regulations are enacted not by the federal government, but at the state level, something over which a Trump administration would have no control.

Then there’s the assumption that all that gas is going to revive American manufacturing — yesterday, Trump singled out the steel industry for rebirth. Cheap natural gas has helped manufacturers here. But there’s plentiful evidence that the gas industry is more interested in lucrative overseas markets, where the price is higher, than in using their product to “make America great again,” unless by “America” you mean shareholders, and by “great” you mean “richer.”