In Downtown’s SPACE gallery, infographic banners hang with titles like “Youth Unemployment versus Song Energy,” and printed song titles with the word “money” in them are scattered across the walls. This new exhibit, WeShouldDoItAll, was hosted on Sept. 20 in conjunction with a panel discussion on the correlation between the arts and income inequality, as well as a new Spotify video detailing the 2016 presidential nominees’ plans to address income inequality. 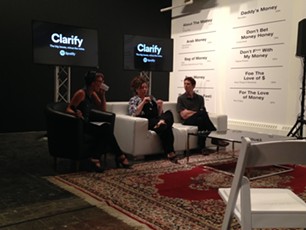 CP photo by Ryan Deto
Cindy Croot (center) and Josh Berman (right)
About 20 people attended the panel discussion, which centered around art’s role in helping and hindering income inequality. Josh Berman, of food-access advocacy group Just Harvest, participated in the discussion and said art and music are “ways to tell stories about issues that are important to my generation.”

University of Pittsburgh professor of theater arts Cindy Croot agreed, but added that access to working in the arts needs to be equitable. “Since many arts internships are unpaid, they are usually only given to people who can afford to work for free,” said Croot. “We need to ask ‘who have the opportunity and who has access?’”

Berman added that in order to get projects funded that address inequality, artist can play a role by using their form to effectively tell stories of economic inequality’s impact. Bernamn said that it’s important to let the residents directly impacted tell their own stories.

The panel also discussed the negative effect art can have on a community, as artist moving into a blighted neighborhood tends to be followed by gentrification. Croot said this is a consistent problem in many cities, but said that having community members “empowered” to make art themselves could bring vibrancy to a neighborhood with less threat of gentrification.