Ghost shows Stage AE the softer side of Satan | Blogh

Ghost shows Stage AE the softer side of Satan

Describing a Ghost performance (and the concept behind the band) to a neophyte can be a challenge. One part contemporary doom metal, one part gleefully hamfisted religious commentary, the Swedish act has gained wide popularity by, in part, at least, following the template of bands like Marilyn Manson and Alice Cooper. On Mon., Sept. 19, the band's six anonymous members brought their brand of theatrical Satanic praise to Stage AE for the second stop of their Popestar Tour.
click to enlarge 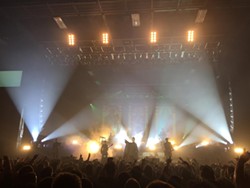 Photo by Andy Klingensmith
The obvious and easy comparisons to painted, hard-rocking bands of years past are not without merit. A modern-day KISS Army, most clad in licensed apparel, lined the sidewalk surrounding the venue long before doors opened at 7 p.m. A few donned face paint in the style of the band’s charismatic frontman, Papa Emeritus III. While it wasn’t difficult to imagine that many had class to attend the next day, it also wasn’t a stretch to imagine that some had previously served as a Knight In Satan’s Service.

In terms of contrast, there may not have been a better choice to open the show than local synth/space-rockers Zombi. The duo set the table for the high production values to come with a (relatively) immobile yet powerful showcase of instrumental wizardry that, depending on your age and demographic, either lives up to their namesake with George Romero-inspired soundscapes or recalls watching Stranger Things last Tuesday. Along with a few selections from its earlier work, a great deal of Zombi's most recent album, Shape Shift, was on showcase, filling the room with chest-thumping drums and grand electronic notes.

After a lengthy introduction (the commitment to recreating a morning at church knows no limit), Ghost opened the show with “Square Hammer,” the poppy, not-quite-haunting single from its latest effort, Popestar. With the reveal of a looming, vibrant reproduction of stained-glass windows and the tried-and-true fog and strobe lighting, the venue was immediately transformed into a brightly colored demonic cathedral, complete with devout followers. The band of Nameless Ghouls, along with Papa, roamed the pulpit with a practiced and controlled enthusiasm that commanded the attention of the room.

With standouts from previous albums such as “From the Pinnacle to the Pit” and “Stand By Him,” the band drew widely from its catalog. Ranging from the vicious, threatening guitar on more traditional metal anthems such as “Mummy Dust” to the softer side of Satan as heard on “Body and Blood,” the show moved with a calculated rhythm familiar to fans of the melodic, heavy style of the group's
albums.

Photo by Andy Klingensmith
Despite the music's dark themes, the disarming and affable nature of Papa’s Nordic-accented banter kept the mood light. “This is a song about drinking blood,” he would state without a trace of irony as the lights turned to crimson. When two local “Sisters of Sin” were introduced on stage, Papa, perhaps knowing his fans all too well, made very clear that there was to be “no touching” as they made their way through the crowd. He did, however, encourage the “fans in the back” to grab each other as they pleased.

Though the show may have seemed familiar to patrons of Ghost’s previous visits to the city, surprises were in store. While the set list contained many of the same songs, the inclusion of fresh pyrotechnics as well as a shimmering ticker-tape shower created the illusion of a larger-than-life ceremony. Each of the final few songs of the night felt like a grand finale, and each time it wasn’t. the congregation cheered in approval. Ending with the soothing “Monstrance Clock,” a hymn that encourages audience participation, Papa bid the crowd goodnight with his final, most important message: “Drive safely!”