There’s a line in “Whistle While You Work," the tune from the 1937 film Snow White and the Seven Dwarfs, where Snow White sings “imagine that the broom is someone that you love.” For some context, she’s explaining to the wildlife in her infested cabin that work is easier when you’re listening to music. There’s a turtle carrying dishes, chipmunks drying plates, it’s a whole thing. I’ve always really dug that lyric because I like the idea of loving a broom and also because she's right, music does make work easier.

Johnny Cash put it a little differently in his tune “Get Rhythm,” in which an optimistic shoeshine-boy touts the virtues of working to a good backbeat, singing “a jumpy rhythm makes you feel so fine, it’ll shake all the troubles from your worried mind.” Shoeshine-boy, as he liked to be called, was right.

Likewise, my mother encouraged my brother and me to put on tunes for chores and dish duty as kids, and we found it worked. We’d throw on the cast recording of Smokey Joe’s Cafe and those dishes would be spick-and-span before we knew it, even without feral turtles to chip in. I’ve been working to music ever since.

In 2012, I took my first full-time job as a copywriter and web-whatever and discovered that I needed to update my work-music routine. Smokey Joe’s would no longer cut it, it had too many words and it was just too excellent overall. I needed something that could take a backseat to my mind-at-work but still keep the wheels turning. I found what I was looking for in a 1994 album by Aphex Twin called Selected Ambient Works Volume II. It’s 24 songs, named by track-number, and clocks in at just over two and a half hours. If you’ve never heard of it, start here.

It’s the sort of album that invites terrible writing, so I’ll just say that it’s “very good” and leave it at that. Over the next two and a half years, I listened to it every day at work. We had one of those open offices like on TV, no cubicles or walls, so distractions were common and headphones were mandatory. With the help of Aphex Twin and SAW II (as it is sometimes called), I was able to hone my focus and deliver some truly acceptable work. I wasn’t fired once.

After a while, I started to crave some variety, so I created two playlists in Spotify, one called “Work” and one called “The Short List.” I branched out from artists similar to “the Twin,” as he is sometimes called, and discovered a vast new world of work-music. Whatever I found went in “Work,” whatever really stuck out was promoted to “The Short List,” which is 57 hours long as of today.

The genres range from (lots of) techno/IDM to classical piano to film scores to minimalism so minimalist it barely exists. But it’s all united by something, not sure exactly what. It’s all vaguely submissive, understated, and very very repetitive. Very. Anyway, I’m inordinately proud of this list and it feels selfish to keep all these gems to myself. So once a week, I’m going to share a couple tracks from "The Short List" in the hopes of spreading good music and helping you maximize productivity. I’ll also include the jobs I think work best with the tunes.

It’s gonna be here on FFW, once a week on Tuesday, and in honor of Snow White, it’s called Music To Sweep To.

Hope you enjoy. Today’s, obviously, is the album that kicked off this whole thing: Selected Ambient Works Vol. II by Aphex Twin.

Best if you work in: artificial intelligence, acupuncture, museum security

Listen to this animal playlist while you read CP's Animal Issue 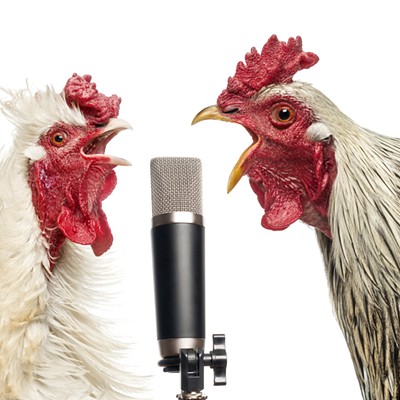