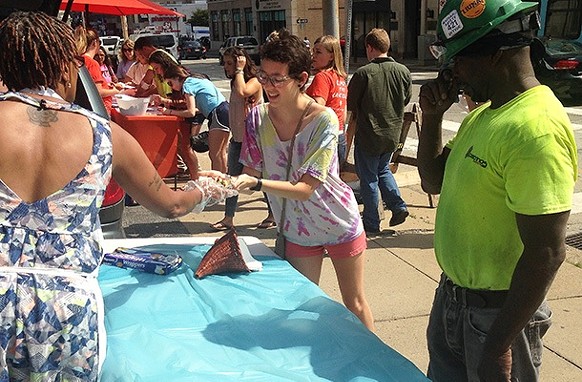 CP Photo by Ryan Deto
Tacos being handed out at "Taco Truck on Every Corner" event in Oakland
Last week, a surrogate for Republican presidential candidate Donald Trump warned that without Trump's strict immigration policies, the U.S. would experience "a taco truck on every corner." The quote was then widely mocked on social media, with many people saying that an abundance of taco trucks would be a great thing.

And on Sept 8, Pittsburgh added two taco trucks to the corner of Forbes Avenue and Halket Street in Oakland in further defiance. The event was hosted by environmental PAC NextGen Climate PA and Braddock Mayor John Fetterman, and was set up to encourage voter registration and inform potential voters on climate-change issues.

"We think of what the future can hold," said NextGen PA spokesperson Aleigha Cavalier. "A future where there is a taco truck on every corner and a future that is conscious of climate change."

The popular Mexican fare was served by Jackie Page Tastes and Vagabond Taco Truck, and dozens of students and construction workers chowed down on the offerings. Passersby were given a free taco if they signed up to commit to vote on climate-change action, and also were encouraged, but not forced, to register to vote.

Fetterman enjoyed a taco as well and spoke to many in attendance. The Pittsburgh Taco Truck served tacos at his campaign-launch event for U.S. Senate last fall and today he said that tacos are a great unifier. (Ironically, the day before the now-infamous taco-truck quote, the Trump campaign unveiled a new "Make Mexico Great Again Also" campaign hat.)

"I don't know anybody in their right mind who doesn't love tacos. Everybody loves tacos," said Fetterman at the event. "Donald Trump is the best surrogate a Democrat ever had. [The comment] really was a gift for Democrats."

Fetterman, who has been campaigning for Democratic presidential nominee Hillary Clinton and former opponent and U.S. Senate candidate Katie McGinty, emphasized that outlandish comments like the "taco truck" one show him that the decision this November should be for the Dems.

"There really isn't a choice, if one of the choices is Donald Trump," said Fetterman.