Friends, relations and admirers will gather this evening to recall the life and work of Oresick, who died Saturday of brain cancer. The memorial begins at 7 p.m. in Kresge Hall, in the University Commons building of Carlow University. 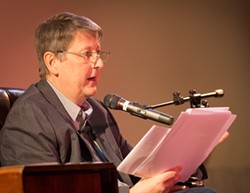 Photo courtesy of Renee Rosensteel
Peter Oresick reads last October at the Carnegie Lecture Hall, in Oakland.
Oresick, 60, was a longtime force on the local literary scene, going back to his days at University of Pittsburgh Press, where he eventually became marketing director and associate director. More recently, he helped build Chatham University’s Low Residency master’s of fine arts writing program, where he taught. He also taught at the University of Pittsburgh and Carnegie Mellon University.

Oresick was an accomplished poet; his best-known collection might have been 2008’s Warhol-O-Rama, an imaginative series of poems about his fellow Western Pennsylvanian of Carpatho-Rusyn heritage. Additional long-running projects included The Pittsburgh Novel, a compendium of more than 2,000 novels, film scripts and plays set in or concerning the region.

Colleagues recall him as much for his personal qualities as for his considerable store of knowledge.

“He was the best man I’ve ever known,” says Michael Simms, a poet and founder of Pittsburgh-based Autumn House Press.

Like so many, Simms calls Oresick kind, generous and self-effacing. Simms also notes that when his children were young, Oresick for a time stayed home to care for them so his wife could pursue her career — a move that later influenced Simms to do the same with his family.

Simms emphasizes that Oresick was a big deal in literary circles for decades: Even living in Texas, Simms says he knew of Oresick largely through his work at the University of Pittsburgh Press, and his role in championing Out of This Furnace, Thomas Bell’s classic novel of Pittsburgh, which the Press eventually reissued. The book is now the publishing house’s all-time best-seller.

Simms moved to Pittsburgh 18 years ago and finally met Oresick, who became not only a contributing editor at Autumn House (which publishes poetry, fiction and nonfiction) but also a mentor to Simms. His years working at the Graphic Arts Technical Foundation, a nonprofit that supports the printing industry, gave him a deep knowledge of printing processes — including new developments like on-demand printing. “He was my explainer-in-chief,” quips Simms.

“Behind the scenes he was a powerhouse,” says Simms. “He never bragged. He never drew attention to himself. It was all about the work.”

Local author and educator Sherrie Flick taught under Oresick at Chatham. As a boss, she says, “He was the same way as he was his whole life — kind, generous, compassionate. … He just always had time.”

Several years back, the Gist Street Reading Series, which Flick co-founded, hosted Oresick for a reading from Warhol-O-Rama. While Oresick dressed like a schoolteacher (which of course he was), he was “wildly creative,” says Flick, and some of his experiments surprised the audience.

Here’s an excerpt from “Andy Warhol for Kiss-and-Tell”:

tsk, but after the first chapter—
at your wife’s pressing—the rest
is like watching a train wreck:

Oresick grew up working-class in Ford City, Pa. His last public reading was this past October, at the Carnegie Library Lecture Hall, in Oakland. He read from Iconoscope: New and Selected Poems. (Here’s Fred Shaw’s review of that book for CP.)

Another of Oresick’s pursuits was icon-painting, in the Russian style. Oresick painted proficiently, applying the technique not only to saints but to such literary figures as Walt Whitman and Emily Dickinson. 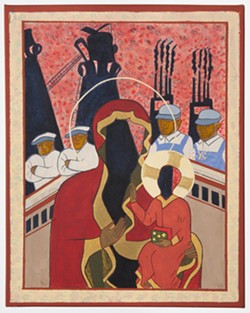 Art by Peter Oresick
Oresick's painting "Madonna of the Steel Valley"
Tomorrow, which would have been Oresick’s 61st birthday, brings the opening of Illuminations: Works by Vanessa German, Peter Oresick and Christopher Ruane, at the Carlow University Art Gallery. An opening reception runs from 5:30-7:30 p.m. Attendance is free. The exhibit runs until Dec. 9. The gallery is located on Carlow’s campus, in Oakland.

On Wed., Sept. 14, the gallery hosts “Peter Oresick: Fuse Lit by the Imagination,” a celebration of Oresick’s poetry and visual art.

The family requests that memorials donations be sent to the Society to Preserve the Millvale Murals of Maxo Vanka.