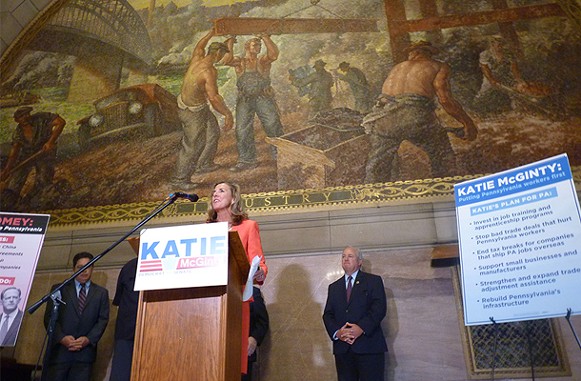 “It is a bunch of bull to say that ‘manufacturing is just a part of our past.’ It is part of our future,” she said to a crowd of about 20 supporters.

McGinty says Pennsylvania has lost more than 120,000 jobs to China in the past few years, which only compounds the loss of manufacturing jobs most towns in the state have suffered over the last few decades. Her plan opposes the Trans-Pacific Partnership trade deal and supports the Trade Adjustment Assistance program, that provides assistance to workers who lost jobs due to international trade deals. She also said if elected she would stop tax breaks for companies shifting their workforce overseas, invest in clean energy and infrastructure, and support small-business manufacturing and workforce development.

She rejected the idea that international goods, particularly from China, are what the country should support and said the U.S. can compete with those international markets.

“Manufacturing is not about cheap labor, it’s about skilled labor, technology and speed to market,” said McGinty. “If a product has to travel on a boat from China, we already have them beat.”

She called out Sen. Pat Toomey’s (R-Pa.) ties to the domestic and international finance fields. (Toomey was an investment banker before getting into politics and worked for a Hong Kong financial firm in 1991.) She hinted that these ties show his loyalty to Wall Street and to China's finance industry (although Hong Kong wasn't part of China and was ruled by the United Kingdom when Toomey was there.)

Braddock mayor and former McGinty primary opponent John Fetterman, who has been campaigning in support of McGinty, was also critical of Toomey. He pointed to Toomey’s book The Road to Prosperity and was critical of its support of free trade.

“You may have heard that Pat Toomey actually wrote a book on free trade,” said Fetterman. “And you can actually buy it on Amazon. Copies of it used are selling for a penny, so I don’t recommend paying full price. And that just speaks to the bankrupt ideas; no one is buying it on Amazon and we aren’t buying it here in the Mon Valley.”

Ted Kwong, spokesperson for the Toomey campaign, issued this response to Pittsburgh City Paper on McGinty and Fetterman’s claims.

"Even John Fetterman has called out Katie McGinty's fraudulent rhetoric on trade, and her historic middle-class tax hikes would have slammed Pennsylvania families and killed jobs," wrote Kwong. "Pat Toomey has consistently fought against bad trade practices like steel dumping and currency manipulation while working across the aisle to open new markets for Pennsylvania manufacturers and farmers."

The latest poll out of Monmouth University gives McGinty a 45 percent to 41 percent lead over Toomey.