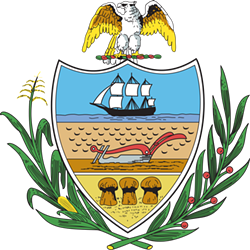 Image courtesy county.allegheny.pa.us
Allegheny County seal
Allegheny County is altering its minority-, women- and disadvantaged-owned business enterprise rules, and at least one major Western Pennsylvania woman-owned business isn’t happy about it. The rules were established in 1981 to ensure minorities, women and other economically hampered groups receive more county contracts than they had historically received. Changes to the bill are currently being considered by Allegheny County Council, after being positively recommended in committee.

Cheri Bomar, corporate counsel for 84 Lumber, spoke in opposition to the changes at this week's council meeting, specially pointing to eligibility requirements in the “Small Business Concerns” section. Under these guidelines, only companies that have averaged gross receipts (money received before subtracting costs) of up to $56.42 million are eligible for inclusion into the program.

“We believe there should not be a cap,” Bomar says. “These programs are about inclusion, and this business and others should not be excluded.”

Bomar also says 84 Lumber has a commitment to helping disadvantaged people through its workforce-development programs, which provide construction-job training to minorities and other economically disadvantaged groups.

84 Lumber has been owned and run by Maggie Hardy Magerko since 1992 (Magerko is the daughter of founder Joe Hardy). The home- and commercial-construction giant, based in the Washington County town of Eighty Four, owns and operates more than 250 stores, including four in Allegheny County. The company brought in around $2.5 billion in revenue last year.

Certification in the MWDBE program means that qualified companies are factored into allocated percentages of county contracts. The county will make a “good faith effort” to give at least 13 percent of contracts to minority business owners, and 2 percent to women-owned and “socially and economic disadvantaged” businesses.

But Ruth Byrd-Smith, county director of the Department of Minority, Women and Disadvantaged Business Enterprise, says the changes aren’t instituting a cap, they are merely updating the bill to ensure the county is adhering to updated forms of its own government and to federal small-business guidelines.

“Recognizing that it was out of date, this legislation was proposed by the MWDBE Advisory Committee to update its provisions,” Byrd-Smith wrote in an email to Pittsburgh City Paper. “Included in those updates are changing things like references to County Commissioner to County Executive, [and] properly defining MWDBE with contemporary terms and terminology. … There is no proposed cap in the legislation. When certain federal or state dollars are being used for a project, we must follow federal or state regulations.”

Byrd-Smith points to language in the bill defining “socially and economically disadvantaged” businesses to emphasize the companies that the bill is targeted toward.

But Allegheny County Councilor Sue Means (R-Bethel Park), who spoke about the legislation at the meeting, was more upset at the process by which the MWDBE bill came to committee. Means said the last time council attempted to alter MWDBE legislation, a public hearing was held. Means claimed the legislation was being pushed through too fast and said she would want to see another hearing.

“There are problems if the legislature writes a bill that affects certain people and those people are not notified,” said Means, who notified companies in her district that might be affected.

Councilor Michael Finnerty (D-Scott Township) disagreed with Means, however, and claimed she was “grandstanding” and unnecessarily criticizing council. “I think we have transparency. I don’t think a council person should call out council like this,” said Finnerty.

Byrd-Ruth acknowledged the first public hearing (after which the bill stalled in committee and did not receive a vote) and said that language in the bill hasn’t been changed since. “The bill proposes the exact process that the MWDBE Department has been using and will continue to use,” she wrote.

Council President John DeFazio (D-Shaler) postponed the vote until next week because the economic development and housing committee chair, DeWitt Walton (D-Hill District), was not present at the Aug. 23 meeting. Council will reconvene at 5 p.m. in the Gold Room of the Allegheny County Courthouse on Aug. 30, and the bill could be put to vote then.