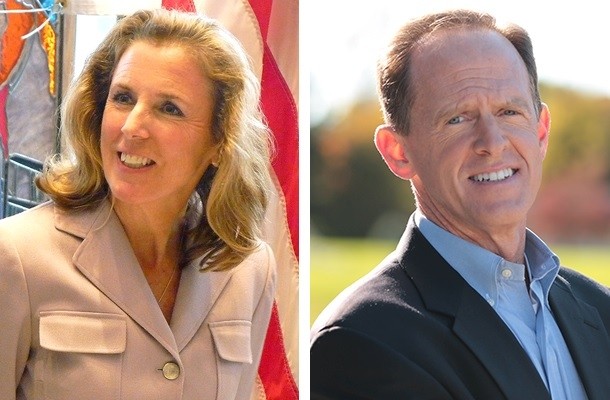 CP photo of Katie McGinty by Ryan Deto; image of Pat Toomey provided by candidate
Katie McGinty and Pat Toomey
Earlier this week, a political-action committee for gun reform endorsed U.S. Sen. Pat Toomey (R-Pa.) in the upcoming November general election. The PAC, Americans for Responsible Solutions, was launched by former U.S. Rep. Gabrielle Giffords (D-Ariz.) who in 2011 was shot in the head during a mass shooting in Tuscon in which six people were killed.

"I am honored to receive this endorsement from Americans for Responsible Solutions in recognition of my work to keep guns out of the hands of violent criminals, terrorists, and the dangerously mentally ill," Toomey said in a statement. "I have long said that we must work together to forge a bipartisan consensus on gun safety, rather than talk past one another with partisan rhetoric. While protecting the constitutional rights of law-abiding citizens, I am committed to bridging the partisan divide to crack down on illegal gun trafficking; close the terrorist gun loophole; require background checks on transactions at gun shows, over the internet, and between non-family members; and also ensure Congress is funding research into our country's gun-violence crisis. I look forward to introducing a bill next Congress that works to achieve these ends."

Today, Toomey's opponent Katie McGinty fired back with an endorsement of her own when Pennsylvania gun-reform group CeaseFirePa announced it was endorsing her.

"CeaseFirePa is proud to endorse Katie McGinty," Shira Goodman, CeaseFirePa's executive director, said during a conference call today. "We believe the people of Pennsylvania want somebody who will consistently lead, consistently fight to solve this problem."

According to CeaseFirePa, Toomey did not respond to a survey the organization sent to both candidates.

"To me, few [issues] would be more important than protecting our family and friends from gun violence. In Pennsylvania, we lose far too many to gun violence, and frankly we do nothing about it," McGinty said during the conference call. "These are tragedies of the highest magnitude, and they deserve a moral response. Respecting the dignity of those lives has nothing to do with disrespecting the Second Amendment."

Both Goodman and McGinty praised Toomey's support for 2013 legislation to expand background checks. However, McGinty says the senator has done little to support gun-reform efforts since.

"We have someone who has seen this issue as a political calculation," said McGinty. "This issue has been inflamed in ways that certainly are not helpful. I would bring responsible huntsmen and sportsmen to the table … to diffuse the vitriol around this issue."

So what is Toomey's record on gun reform? Toomey has voted against banning high-capacity magazines with more than 10 bullets. He voted to prohibit suits against gun makers and sellers for gun misuse. And he voted to decrease the gun waiting period from three days to one.

Despite these votes, Toomey supporters, including former New York Mayor Michael Bloomberg, cite the Pennsylvania senator's response to the 2012 Sandy Hook mass shooting that left 26 dead, including 20 children — namely, his sponsorship of the 2013 background-checks bill that ultimately failed.

"Americans for Responsible Solutions PAC is endorsing Senator Toomey for re-election this fall because our nation needs more Republican elected officials to stand with the vocal majority of Americans who support commonsense steps that help keep guns out of the wrong hands and prevent gun tragedies," said Peter Ambler, Americans for Responsible Solutions PAC executive director, in a statement. "In the wake of the tragedy at Sandy Hook Elementary School, Sen. Toomey stood up for responsibility, stood up to the gun lobby and stood up to many in his own party. While he has not backed every proposal we have supported, as advocates for gun-safety laws and safer communities, we're thankful for Sen. Toomey’s leadership."